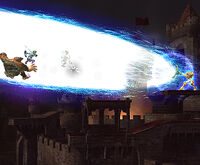 Zero Laser is Samus Aran's Final Smash in the Wii video game Super Smash Bros. Brawl. It can be performed with Samus when she has possession of a Smash Ball. When the person controlling Samus chooses to execute it, she'll shoot out a colossal laser beam that will engulf almost all of the stage. After doing this, Samus' suit will overheat and will fall off and she turns into Zero Suit Samus.

In Super Smash Bros. For Wii U / Nintendo 3DS, the Zero Laser has been altered. The first thing is that now Samus can somewhat tilt the laser to hit other opponents. Samus also doesn't transform into Zero Suit Samus after the attack ends as she is a separate character in this game. This was the first final smash of the game shown.

Retrieved from "https://nintendo.fandom.com/wiki/Zero_Laser?oldid=508563"
Community content is available under CC-BY-SA unless otherwise noted.