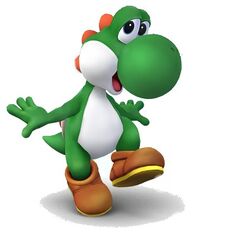 Yoshi's popularity has led to the use of him in all spinoff games thus far, sometimes in all his colors. Super Smash Bros. Melee has a Yoshi's Story themed stage while Super Smash Bros. Brawl has a Yoshi's Island themed stage. Yoshi is a playable character in Paper Mario: The Thousand Year Door and the species appears in Paper Mario. Yoshi can also be summoned in Super Mario Sunshine and will make an appearance in Super Mario Galaxy 2. Because Bentendo is lazy and can't be bothered to keep this place up to date

This Mario related article is a stub. Please help by expanding it.

Retrieved from "https://nintendo.fandom.com/wiki/Yoshi_(series)?oldid=124442"
Community content is available under CC-BY-SA unless otherwise noted.