Nintendo
Register
Don't have an account?
Sign In
Advertisement
in: Class A articles, Nintendo, Consoles,
and 4 more

The Wii Mini (also called the RVL-201 and stylized as Wii mini) is a slightly smaller revision of the Wii as well as the third and final model of the Wii family. Multiple features have been removed from this Wii model in order to reduce the price. It was announced by Nintendo of Canada, though it was heavily rumored before the announcement. Announced first on November 27, 2012, it was first test released in Canada on December 7, 2012, in Europe and Canada in March 2013, and in North America on November 17, 2013. It comes with a red Wii Remote Plus, Mario Kart Wii, and matching Nunchuk controller.[1] The Wii Mini was discontinued worldwide on November 13, 2017.

All internet capabilities were removed, as well as support for the Wii LAN Adapter. GameCube controller and memory card ports were removed, as well as the ability to play GameCube discs (like the Wii Family Edition). The Wii Mini only supports composite cables, and it cannot output 480p. The Wii Mini has a modified version of the Wii Channel Menu, with multiple menus from the settings removed as a result of the Wii Mini's missing features. Unlike the original Wii and Family Edition, which let you slide discs into the drive, the user opens a door and presses discs into place, identical to how GameCube discs are used. 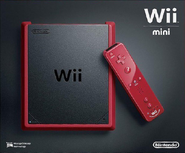