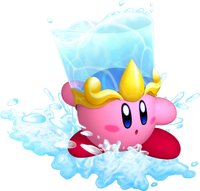 Water Kirby is one of Kirby's copy ability forms. It lets Kirby spit high pressure blasts of water at his enemies as well as manipulate water in order to travel quickly. This ability originally appeared in the Kirby anime before being becoming canon to the games with Kirby's Return to Dream Land.

Kirby wears a golden circlet with a vortex of water on top of it.

Water Kirby's main method of attacking is using waves of water to attack or ride. Instead of dashing, Water Kirby can surf. He can also produce a geyser but, cannot move while using it. He can also fire water to the ground to hover. Kirby can also splash water around him to hurt enemies besides him.

Water was originally planned to appear in the Gamecube entry but, it was cancelled.

Enemies that give Water

Retrieved from "https://nintendo.fandom.com/wiki/Water_Kirby?oldid=610189"
Community content is available under CC-BY-SA unless otherwise noted.