Nintendo
Register
Don't have an account?
Sign In
Advertisement
in: Class B articles, Articles in need of expanding, Nintendo Entertainment System games,
and 14 more
English

) is a puzzle game released for both the NES and SNES in 1994. It was also one of the many playable NES games in Animal Crossing for the Nintendo GameCube; it could be obtained through using interacting with an islander using the game's Animal Island mode on the Game Boy Advance.

The NES version is notable for being the last US NES release given Nintendo's official license (and in turn the last Mario game to be released for the NES), the last NES game developed by Nintendo themselves, and, as a result of its late release, the only officially released NES game with an official rating by the ESRB, being rated K-A for Kids to Adults. The SNES version goes unrated. It is known for being one of only two games that have Toad as the main starring protagonist (the other being Kinopio Live), though Captain Toad: Treasure Tracker's main character is Captain Toad, a similar character. Wario's Woods was released to the Wii Virtual Console on November 19, 2006 in America, and December 7-12, 2006 in the PAL regions and Japan. The NES version was later released on the 3DS Virtual Console and Wii U Virtual Console, where it received the E for Everyone rating, and was made available to Nintendo Switch Online members from December 12, 2018.

Wario has sent his allies to invade the Mushroom Kingdom. Toad, Wanda, and Birdo plan to defeat the enemies. At the time, these three characters were misfits and were not very popular, and only two of them - Toad and Birdo, actually became popular. Wanda first appeared in the video game Mario & Wario for the SNES. 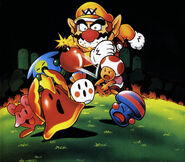