Nintendo
Register
Don't have an account?
Sign In
Advertisement
in: Class A articles, Nintendo, Consoles,
and 5 more

View source
watch 03:01
Wiki Targeted (Games)
Do you like this video?
Play Sound

The Virtual Boy was a misunderstood portable video game console released in 1995 by Nintendo. The system used a monochromatic (red and black) visor that simulated a 3D view on its games. It is noteworthy for being one of the few financially failed products of Nintendo. It was the last product former veteran Nintendo-designer Gunpei Yokoi had developed.

The Virtual Boy had several flaws that led to its discontinuation after just one year. One of the reasons it failed is because it was slightly rushed to get the people on the team to work on the Nintendo 64 (then dubbed the "Ultra 64") and development was expensive. For some people it also caused eye strain after playing it for a while. The console also had an EXT. port, presumably for multiplayer features. If this was the case, the Virtual Boy never got around to releasing a multiplayer cable, possibly due to the console's low ratings and discontinuation.

The 3D images produced are only hues of red and black instead of full color graphics. The system ran off of six AA batteries using a Battery Pak. The battery life was not strong, only lasting about four total hours of gameplay. An AC Tap was sold separately, and used the SNES adaptor. Only 14 games were released in the United States, and 22 in Japan. The system was cancelled before a 3rd party market could be made or the Virtual Boy even released in Europe.

The 3D effects are a result of two 1x224 linear arrays, each one directed to an eye that are presented to the player through oscillating mirrors that cause the Virtual Boy to emit a murmur. The 3D effect can cause trauma in the ocular area (in fact, Nintendo urged parents not to let children under the age of seven to play the system since it had the potential to damage their eyes). Knowing this, Nintendo inserted an option within each Virtual Boy game released that pauses the game every fifteen or thirty minutes.

Some critics questioned Nintendo's use of only red and black for the Virtual Boy. This choice was both monetary and functional, though at the same time was not entirely appealing to the consumer. Nintendo claimed that they had a full color prototype, but the unit would be too expensive for consumers and production.

The Virtual Boy is best known one of Nintendo's worst failures and Gunpei Yokoi's last product during his working efforts at Nintendo. Yokoi had been with Nintendo for years, developing toys for them long before they ever planned on entering the video game industry. Nintendo's long-term success can even be attributed to the developer, who went on to develop the Game & Watch, the Game Boy, and several classic Nintendo franchises. Gunpei Yokoi long intended the Virtual Boy to be his last project at the company. Some fans have speculated that Yokoi left because of the failure of the Virtual Boy or that he was fired. In reality he had planned to retire long before his departure (he actually had stayed four years longer than planned).

Nintendo R&D1, the team Yokoi ran, contained around sixty people that all worked tirelessly on the Virtual Boy. The deal to work with Reflection Technologies Inc, a United States based company, was finalized around 1991 or 1992, though at the time neither company had a clear vision of what they wanted to do just yet.

Gunpei Yokoi admitted in 1994 that very few publishers outside of Nintendo were given development kits to create games for the system. When pressed to explain why this was the case, he stated that Hiroshi Yamauchi, the then president of Nintendo, had made this decision in order to control the quality that would be released for the Virtual Boy. In Gunpei's words, "we want to limit that danger and maintain as much control as possible." Nintendo of America in Redmond, Washington viewed the situation in a different way. Knowing that the Virtual Boy wasn't a success in Japan, Nintendo of America tried to enlist as much help as possible to launch the system in the states and Canada. Prior to the launch, they held a developer's conference in the Seattle area that lasted for two days.

David Sheff, the author of the popular video game history book Game Over, has stated that Gunpei was unsatisfied with the end product. Wanting to work on it further, Nintendo thought it was good enough and pushed the title out to retailers so that they could work almost exclusively on their Nintendo 64 console.

The release was overall not what Nintendo expected. The normally long lines at stores for the newest system were nowhere to be found. President of Nintendo Hiroshi Yamauchi boasted that all units shipped out were sold, but stores said they received as many as two systems. Nintendo later admitted to not pushing very many systems, and said that sales were "not as good as they expected". A total of 770,000 units were sold before the plug was pulled. Only 140,000 were sold in the United States, and 630,000 were sold in Japan. The system never saw a release in Europe or Australia.

Rental company Blockbuster was also renting the systems out, they came in a hard case and could be rented for $9.99, along with games. These rental systems have become collector's items. A promotional giveaway with Blockbuster and NBC in Nintendo Power included a free Virtual Boy, and trips to see the sets of NBC's most popular shows.

Nintendo and third parties developed advertising campaigns for the Virtual Boy and the games that were released for it. The ad campaigns each had relevant titles such as "A 3D game for a 3D world", "Turn it on Virtual Boy", and when the Virtual Boy's price was reduced to ninety-nine dollars, "New Low Fare to the Third Dimension". Unfortunately, Nintendo found it hard to market the Virtual Boy, as people would have to see it to be able to understand how the Virtual Boy works. The advertisements were considered mediocre and weren't really selling the system hardware-wise.

As a tribute to Nintendo's history, the Virtual Boy has had small references in games like Super Smash Bros. Melee and Warioware Inc. There also appeared one in Super Paper Mario, as a part of Francis's collection of video games.

Planet Virtual Boy is a community of both Virtual Boy owners and Virtual Boy enthusiasts dedicated to the preservation and homebrewing of the system.

The Virtual Boy was not Nintendo's first excursion into the 3D industry and was not their last. Nintendo had experimented with 3D all the way back to the Famicom with the Famicom 3D System. While not released internationally, games with 3D functionality could be properly viewed with 3D glasses. Very few games were released on the 3D system, with the most noteworthy titles being Famicom Grand Prix II: 3D Hot Rally and Highway Star (Rad Racer outside of Japan).

Following the release of the Virtual Boy, Nintendo experimented with 3D for the Nintendo GameCube, with longtime Nintendo employee Hideki Konno saying that Luigi's Mansion in particular looked excellent. This idea was scrapped as the add-on would have been more expensive than the console itself. In June 2010, Nintendo revealed the Nintendo 3DS, a system that supported 3D graphics without the need for glasses. This console was released on March 27, 2011 in North America.

In August 1995, the Virtual Boy was featured on the cover of Nintendo Power V75. 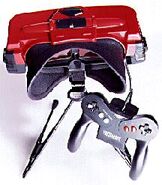 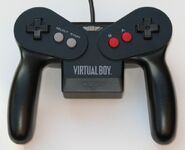 The controller for the Virtual Boy.
Community content is available under CC-BY-SA unless otherwise noted.
Advertisement