Virion is a character in the 3DS game Fire Emblem: Awakening. His starting class is an Archer.

He is constantly joking, and rarely hints at his true intentions. He is also in search of a bride, and asks out any woman who crosses his path. He apparently spends more time in front of the mirror than the rest of the army.

Virion appears as Eleonora Yumizuru's Mirage. He starts as an Archer but can be promote into either a Sniper or an Assassin. His aristocratic nature leads him to try to be a guide for Eleonora to become a refined lady, but this leads him to butt heads with her often. 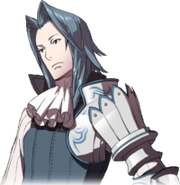 Virion's portrait.
Add a photo to this gallery

Retrieved from "https://nintendo.fandom.com/wiki/Virion?oldid=520028"
Community content is available under CC-BY-SA unless otherwise noted.