Violet City is a fictional city in the Pokémon series located in the Johto region and has appeared im the second, and fourth generation games. Pokémon Trainers come to Violet City in order to win a Zephyr Badge from Falkner, the Violet Gym Leader, who specializes in Flying-type Pokémon. It features Sprout Tower (HM05 Flash received after winning) and Earl's Pokémon Academy and has three entrances: east via Route 31 (by Poké Center); south via Route 32; north via Route 36. It also has the usual Poké Mart and Poké Center.

The location returned in Pokémon HeartGold and SoulSilver with some changes: Trading can happen after you have a Pokédex (no badges needed); Flash is now TM70 (only use it once on one Pokémon); HM6 Rock Smash is available on Route 31 (as soon as you can reach it), which makes Rock Pokémon easier to get and defeat, but needs Zephyr badge to use outside of battle. 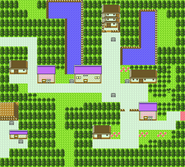 Retrieved from "https://nintendo.fandom.com/wiki/Violet_City?oldid=525551"
Community content is available under CC-BY-SA unless otherwise noted.