Valor are first sphere cherubim which are on the second rank of the hierarchy of Laguna, the chain of command of the Angels of Paradiso. Valor is a shield-like Angel who is constantly seen alongside a sword-like angel similar to Valiance, both Valiance and Valor are used as weapons by a huge machine-like body. Valor is one of the best warrior in the whole army of Paradiso and is often in the front lines in the wars against the darkness.

Valor is first seen in chapter VI where it act as the boss of this chapter. As Bayonetta and Loki attempt to cross the Bridge to reach Fimbulventr, Valor uses its shield to slice up the walkway and send them both tumbling down the Cathedral of Cascades' tower. Bayonetta sprouts Malphas' wings and takes to an airborne battle as they fall. Eventually, they both fell into water and continue the fight underwater. He is eventually traped by Hydra and use his sword to land one final blow that open the bottom of the tower and send Bayonetta and Loki swirling to underneath the Cathedral. Its shield is then dragged to Inferno. Valor makes a reappearance during the final chapter, attacking Bayonetta and Balder on their way to Fimbulventr.

"As his name would imply, Valor is a warrior that regards bravery in the highest degree. Taking the form of a shield, he stands with Valiance at the front lines of Paradiso's wars against Inferno. It is said that when people are in need, a warrior clad in solid gold armor will appear to rescue them, carrying a sword and shield of incredible power. While fending off incoming evils with the shield, the warrior will eliminate its enemy with a single blow of its sword, claiming victory for those with a strong-held faith." 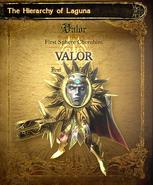 Valor's page in the Hierarchy of Laguna book.

Valor's card.
Add a photo to this gallery
Retrieved from "https://nintendo.fandom.com/wiki/Valor?oldid=527360"
Community content is available under CC-BY-SA unless otherwise noted.