Valiance are first sphere cherubim which are on the second rank of the hierarchy of Laguna, the chain of command of the Angels of Paradiso. Since Valiance are cherubim, their existence is purely metaphysical but to the inhabitans of the World of Chaos who have the ability to see them, they appear as a sword held by a headless machine-like body. They are said to have first arrived on earth by riding a comet sent by Jubileus, The Creator itself.

"Valliance is a First Sphere Cherub considered particularly ascendant as a spiritual being even among the other angels. Physical shape means little to angels of this rank; they exist in a metaphysical form that demonstrates the majesty of God. The most ambitious and brave of the Cherubim, there are some sources that believe Valiance first arrived on Earth thousands of years ago, riding a comet of God's wrath that destroyed everything in its way. Valiance's sword, the Valiantium Blade, is said to have the power to cut in two anything in Paradiso or Inferno, and is prophesized to one day assist a team of over a hundred heros in saving humanity from an invading evil." 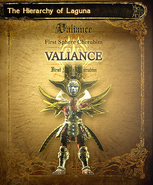 Valiance's page in the Hierarchy of Laguna book

Valiance's card
Add a photo to this gallery

Retrieved from "https://nintendo.fandom.com/wiki/Valiance?oldid=504331"
Community content is available under CC-BY-SA unless otherwise noted.