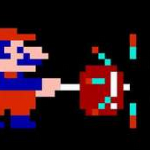 Please note that you are not allowed to copy pages form other places on to this wiki unless you have permission from the author.

Congratulations Jumpman98, you have won the Sandbag Badge!

Thanks for adding the game manuals. Though, could you please add them in the gallery? Thanks. Also, I found PDF Converter 1.26, an application that allows you to convert PDF to PNG, and another site with hundreds of manuals here;

Re Re: Game Manuals

Did you want to just add the slideshows directly into the articles? Or should I add a "Gallery" link to the infobox (like the game articles)?

You can put page numbers in if you want, but it's probably not necessary.

You betcha. Im on it!

I thought they said that it was a bazooka in the treehouse e3 live.

Re:Is this page even necessary?

I don't know much about the subject matter, but since he worked on two games for a Nintendo system I'd hazard to guess that he is included within the scope of the wiki. Though the page does need a good bit of work and updating. ~Rocketslime_1_1 (Talk | Wall | Contribs) 20:42,6/10/2014

You bring up a good point. They technically aren't "fan" sites. The only other type it could be listed as is "Other"...unless Rocketslime wants to add another type to the Head template. The Head template and article types was originally his idea. I'll ask him and see what he thinks. Dubya Scott (talk page • home wiki) 02:47, July 1, 2014 (UTC)

Hey, Jumpman. Rocketslime did a little research and decided to leave them classified as "fan website". His explanation can be seen on my talk page. Thanks. Dubya Scott (talk page • home wiki) 03:39, July 1, 2014 (UTC)

Retrieved from "https://nintendo.fandom.com/wiki/User_talk:Jumpman98?oldid=309155"
Community content is available under CC-BY-SA unless otherwise noted.