Eric, AKA BlueHighwind, has been having a great time at E3 2014! Make sure to check out his blogpost, details his experience (so far) at the big show.

We captured a photo of Eric at the Nintendo booth, posing in front of the logos from one of his favorite Nintendo franchises. Check out the Wikia E3 2014 Portal for updates about our lucky winner's daily exploits, as well as general news and information about the show. 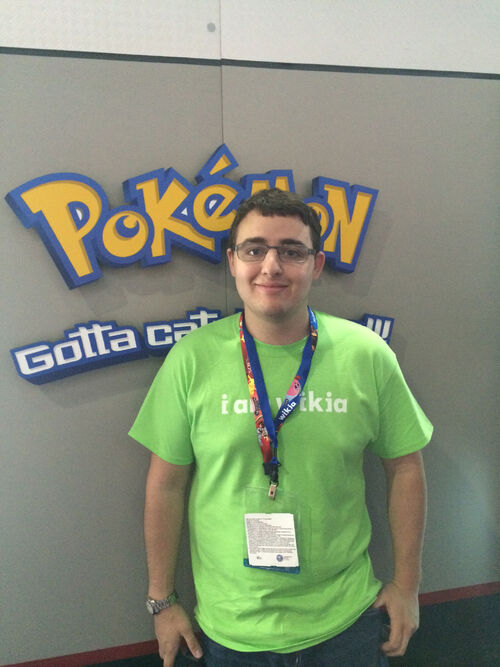 Are you the world's biggest Nintendo fan? Is your wall adorned with posters of Mario, Zelda, and Samus Aran? Do you know ALL of the lyrics to the Pokérap? You might have what it takes to represent the Nintendo Wikia community at E3 2014. Put your fandom to the test by entering Wikia's 2014 Golden Ticket contest! We're sending one Nintendo super-fan on an all-expenses paid trip to Los Angeles, California for the biggest video game event of the year – E3 2014 – where they'll get a sneak peek at Nintendo's upcoming lineup for 3DS and Wii U, with VIP access to Nintendo's booth.

But we're not just taking anyone. We're looking for fans who can prove they have contributed constructively to the Nintendo community here on Wikia or elsewhere and are comfortable tweeting, blogging and communicating with Wikia's awesome Nintendo community while at the show.

Fill out the form below to enter – don't forget to provide links to your contributions!

The contest has ended!

Thanks to everyone for participating! We received a number of excellent entries and it was a difficult selection process, but in the end, there can only be one winner! Drumroll, please.

Congratulations to our winner, BlueHighwind!

BlueHighwind will be attending E3 2014 as a VIP! For the latest news and updates about Nintendo (and everything else) at E3 2014, be sure to check out our E3 Portal over on the Wikia Games Hub.

Again: Big thanks again to everyone who participated! Remember, there's always next year!