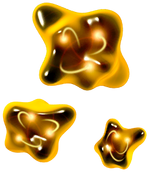 This month's featured article is the X-Parasite. This was chosen by myself as there were no suggestion made. Don't forget to to suggest A class articles on the Nomination page if you want them to be featured for a month.

I chose this article to celebrate the upcoming release of Metroid Dread next month. The X-Parasite is the main antagonist of Metroid Fusion, the game that happens just before Dread chronologically. The X Parasite also has a role to play in the plot of Metroid Dread as it is the reason Samus Aran is heading to ZDR. She is drawn here by a mysterious transmition showing an individual parasite still alive after the events of Fusion. Since Samus is the only creature in the universe that is a predator of the X due to her Metroid DNA, she heads there to put an end to their threat. The Galactic Federation has also sent their E.M.M.I.s there to search the planet for any X activity.