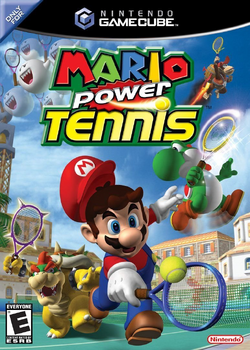 This month's featured article is Mario Power Tennis. This was chosen by myself as there were no suggestion made. Don't forget to to suggest A class articles on the Nomination page if you want them to be featured for a month.

I chose this article purely because it was complete. It goes in details on the content of the game and acually adds interesting visuals while doing so. Released in 2004 on the Nintendo GameCube, Mario Power Tennis is the fourth Mario Tennis game and it is the first one to really incorporate crazier elements from Mario's world into Tennis form. It also has a wide range of characters all with their own special move.