For those who don't know, Donkey Kong Country: Tropical Freeze was confirmed to have four different playable characters. They've already confirmed Donkey Kong and Diddy Kong to return, plus the addition of Dixie Kong. So who could the fourth character be?

Well, obviously it will probably be a bigger, DK-sized character to balance out Diddy and Dixie being the "piggyback characters". There's been a lot of speculation that Funky Kong may be the fourth character, though there is one snag. Take a look at these photos: 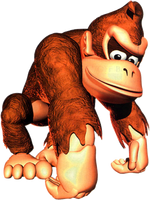 As you can see, Funky is able to naturally stand up straight without having to put his fists on the ground. And it's not just in this artwork. His character animations for games such as Donkey Kong 64, Mario Kart Wii, Mario Super Sluggers, and Donkey Kong Barrel Blast show him standing upright, meaning that he would have to lose his posture if he was in.

So here are who I think will be the fourth character:

It's true that we haven't seen DK Jr. as a playable character since Mario Tennis on the Nintendo 64. So why not bring him back? The closest thing he's had to being in a main series game is in the arcade, and Donkey Kong's own son seems like some wasted potential. 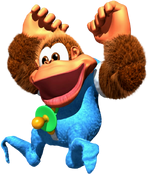 Since Dixie Kong is playable, I think Kiddy is a highly likely choice, considering his first, and currently only, appearance was Donkey Kong Country 3, not counting remakes. I know he's not exactly a fan favorite, but hey, if Wii Fit Trainer can be in Smash Bros., then anyone can be in anything.

And that's my thoughts on the matter. Please let me know what you think, or if you have a difference of opinion.

Retrieved from "https://nintendo.fandom.com/wiki/User_blog:AdamGregory03/DKCTR%27s_Fourth_Character?oldid=288418"
Community content is available under CC-BY-SA unless otherwise noted.