This version carries a lot of changes seen in the original Super Street Fighter II Turbo in the Arcade (such as the entire playable cast, the overall design of lifebars, the Super Combo system, etc), with addition of new content like new modes, two new characters, and a rebalanced gameplay with new mechanics.

The story presumably would follow the premise seen in all the previous Street Fighter II games, although with addition of new playable fighters, is still to be confirmed the canonicity of the events and its tweaks and retcons.

Most of the changes seen in gameplay of Super Street Fighter II Turbo are present in this version, but it plays in a unique speed and links for Combos are easier. The overall balance of the game is totally new, and is confirmed that Tech Grab (the ability to escape of a grab move of an opponent) is among of the changes in the engine. The game also supports touch-screen controls

The game can be played the game with the original look with 16-bit graphics, or with redrawn HD sprites by UDON artists, like in Super Street Fighter II Turbo HD Remix. Depending of the visuals choose, the game will be either full screen in a 16:9 ratio in HD mode, or with lateral stripes with a centralized gameplay in 4:3 ratio in Retro mode.

Confirmed by the first trailer, there's a new mode called Buddy Battle, similar to the Dramatic Battle in Streeter Alpha 3, which two players can fight together against a single CPU opponent. Online play is still to be confirmed in this mode, but is confirmed for the traditional 1 vs. 1 fights.

There is a motion-controlled minigame where the player plays as Ryu throwing Hadokens and other attacks on Shadaloo Soldiers in a series of waves.

Two new characters were added in the roster, being them Evil Ryu from Street Fighter Alpha 2, and Violent Ken who was first playable in SNK vs. Capcom: SVC Chaos. Both characters are shoto-clones and evil counterparts of the protagonists Ryu (possessed by the power of Satsui No Hado) and Ken (brainwashed by M. Bison, as seen in the Street Fighter II Animated Movie). Evil Ryu maintains most intact his moves from previous appearences (with a moveset similar to Akuma, including the signature Super Combo Shun Goku Satsu), but he also has a command-motion kick from the Alpha games. Violent Ken, plays more like Ken in his Super Turbo iteration, with the addition of a command-motion dash from his game of debut, with also a new Super Combo based on above mentioned title.

For other characters, until now, is seen that Akuma have a Super Combo meter, not present in the original Super Turbo (but was in Revival and HD Remix), and the voices of the fighters in HD mode is from most modern games (like Street Fighter IV and V), as well a new announcer is heard. New remixes for the characters theme is heard during gameplay in HD mode too.

All the characters present in the previous revisions are playable (except Shin Akuma), plus two more, totaling 19 fighters: 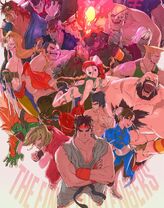 Promotional Art.
Add a photo to this gallery

Retrieved from "https://nintendo.fandom.com/wiki/Ultra_Street_Fighter_II:_The_Final_Challengers?oldid=545172"
Community content is available under CC-BY-SA unless otherwise noted.