Romaji: Tatchijenerēshonzu) is a brand of games for the Nintendo DS and the Wii that is aimed at a non-hardcore gaming crowd, or even to people who have never played video games before.

Most of the games that are marked with the Touch Generations label (Western label seen on the right) are easy to learn and play, and lack any deep plots and confusing control schemes. Touch Generations games are also known for sometimes having cheap price points in comparison to other titles available.

Touch Generations'games have all sold very well, particularly in Japan. Not only have the games themselves sold well, but many of the titles have stimulated many Nintendo DS purchases in Japan, with Brain Age: Train Your Brain in Minutes a Day! in particular spurring a lot of growth.

When Touch Generations titles originally began appearing, many Nintendo fans felt alienated, as they are a drastic departure from what fans typically expected of Nintendo. Others accused the titles of not even being video games at all.

“whereas before we had established a Touch! Generations brand, created special corners in shops and used a special logo, the company has decided not to use this brand name for Nintendo 3DS. I try to not use the word “success” to describe our situation as it may stir egoistic emotions which may lead us to be drowned in it. I would say that Touch! Generations was one example of success. But to do the same thing is merely playing defense. Something else you can say is that it’s no longer surprising to talk about older people playing video games. People with no video game experience now have a way to get started, so game systems now belong to everyone regardless of age, gender or experience.”
―Satoru Iwata[[Template:PG|[source]]] 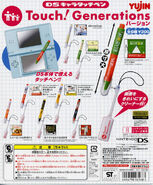 A Gashapon poster from Touch Generations. 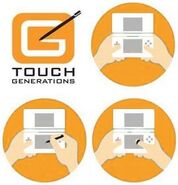 Retrieved from "https://nintendo.fandom.com/wiki/Touch_Generations?oldid=510888"
Community content is available under CC-BY-SA unless otherwise noted.