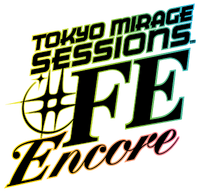 The battle system is somewhat similar to a mix of the Shin Megami Tensei series and Persona series with its own twist on tag attacks called Sessions. The characters fight in a turn-based order according to their speed. The attacks are organized into the Fire Emblem weapon triangle for physical attacks and a Shin Megami Tensei magic system for magic attacks. The characters take on abilities of the classes rather than be of those classes like the Fire Emblem games. The Session skills are special attacks the other characters can perform automatically in correspondence to the type of move just used by the player controlled character that can be chained together for extra damage. Nonactive party members can even join Session Attacks once they've acquired the Radiant Skill. Additionally, party members can also perform Duo Arts during Session Attacks which are powerful combination moves between two characters that have gained affinity in the game.

The game is set in a modern day Japan (unlike the Fire Emblem games). The game is chapter based with the various locations in Tokyo changing between each chapter. The game's dungeons, called Idolaspheres, are based on the real location they are accessed from. These dungeons are a mix of dungeon exploration, fighting the violent mirages and solving the idolasphere's themed puzzles.

Changes from the original game

The most notable change is the addition of 3 new playable characters. They were support characters in the original, but now Maiko Shimazaki, Barry Goodman, and Tiki are playable in combat. The game also features a new song for Kiria and Tsubasa. There is now a quick session feature which likely skips most of the session attacks in a chain instead of having the player watch all of them.

New costumes and accessories are available as seen with Kiria's new outfit on the box art and glasses on Tsubasa in various pre-release screenshots.

The setting, much like most entries in the Shin Megami Tensei franchise, is modern-day Japan, specifically Tokyo. The plot revolves around Fortuna Entertainment, a talent agency that has scouted the main characters.

The main character, Itsuki Aoi, is a normal high school student along with his lifelong friend Tsubasa Oribe and classmate Touma Akagi. One day the three of them come into contact with what are known as Mirages, beings from another world who are drawn to those with creative potential such as Tsubasa (who wants to be a singer) and Touma (an aspiring action actor).

While many Mirages are malevolent and feed of the energy of others, Itsuki and his friends manage to partner with their Mirages and use them in battle (similar to the titular Personas of the Shin Megami Tensei sub-series). Together, they join forces to fight evil Mirages and found out he mysteries of their amnesiac Mirages, such as Chrom and Caeda.

The game was announced during the Nintendo Direct that was hosted on September 4th 2019. A release date was confirmed and it was revealed that this version of the game would contain additional content such as new songs, playable characters and story elements.

Retrieved from "https://nintendo.fandom.com/wiki/Tokyo_Mirage_Sessions_♯FE_Encore?oldid=550240"
Community content is available under CC-BY-SA unless otherwise noted.