Titan is a summon featured in the Final Fantasy series. He is one of the most popular summons in the series, though he originated as a simple character in the original Final Fantasy on the NES, in which he would allow you to get through the passage to the Warriors of Light if you gave him a Ruby to snack on.

His next appearance was on the Japanese exclusive (until its remake on the Nintendo DS) Final Fantasy III. This marked Titan's first appearance as a summon. His appearance was of a hulking, gray humanoid who wares only undergarments of a similar color and two golden bracelets. His three attacks included Clobber, Stomp and Earthen Fury. Every one of his attacks were of the Earth element.

In Final Fantasy IV, Rydia is capable of summoning Titan early on in the game, though the player won't be able to use him until the character rejoins the party for the second time. Early on, she summons him in a cutscene once she finds that her mother has died after a mistake by the main character Cecil Harvey and Kain Highwind. The creature splits the land using the move Earthquake and causes Kain to go missing. In the Nintendo DS remake of Final Fantasy IV, Namingway loses all of his maps inside the giant crack that is developed because of Titan.

Titan reappeared in Final Fantasy V for the SNES, in which the beast would become a summon automatically in the Karnak Meteor.

Titan would appear once more in a multitude of Chocobo video games and as the Rank III Earth Melee Esper in Final Fantasy XII: Revenant Wings. 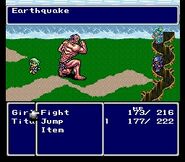 Titan being summoned by Rydia in Final Fantasy IV.

Titan in Final Fantasy XII: Revenant Wings.
Add a photo to this gallery
Retrieved from "https://nintendo.fandom.com/wiki/Titan?oldid=526187"
Community content is available under CC-BY-SA unless otherwise noted.