Thwimps are significantly smaller variants of Thwomps that first appeared in Super Mario World. Their name is a portmanteau of "Thwomp" and "wimp", making reference to their diminutive size.

Thwimps appear in both the SNES and the Game Boy Advance versions of Super Mario World, where they are enemies and hop back and forth in large arcs trying to land on Mario or Luigi. They first appear in 2 Morton's Castle. They usually appear in groups of two and create obstacles in small hallways. In 3 Lemmy's Castle, the Thwimps created by Magikoopas can be destroyed by shells. However, the Thwimps are only vulnerable for a few seconds, after which the shell will have no effect.

A lone Thwimp is found near the beginning of the World-e level Swinging Bars of Doom in Super Mario Advance 4: Super Mario Bros. 3. It uses the same sprite as in Super Mario World and can now be defeated by Statue Mario, Invincible Mario, or by Hammer Mario's hammers.

Thwimps reappear in New Super Mario Bros. U. They act the same as they did in Super Mario World and also have the same overall appearance. They can be defeated by hitting a ? Block while the Thwimp is sitting on one or by carrying a frozen enemy under one. Additionally, blue cracked blocks can be spotted on the places where Thwimps stomp. They only appear in Wendy's Shifting Castle and sometimes spin while jumping.

The Thwimp is one of the very few enemies that does not reappear in New Super Luigi U.

Thwimps also make a few other appearances in later games such as Mario vs. Donkey Kong, where they are enemies that appear in the Spooky House world of the game. The Thwimps try to defeat Mario by landing on him and are invincible, but once again, Mario must avoid them to defeat Donkey Kong and beat the level.

Thwimps reappear in Puzzle & Dragons: Super Mario Bros. Edition and can be allies and enemies to Mario in his adventure. 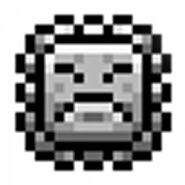 A Thwimp in New Super Mario Bros. U on the blue floor.
Add a photo to this gallery

Retrieved from "https://nintendo.fandom.com/wiki/Thwimp?oldid=502942"
Community content is available under CC-BY-SA unless otherwise noted.