The Wonderful 101 is a game developed by PlatinumGames and published by Nintendo for the Wii U on September 15, 2013). The game has you play as a group of superheros tasked with stopping an alien invasion, who can morph together to form various objects to attack enemies, solve puzzles and traverse through the environment. When it was initially announced, the game was known by it's working title Project P-100. In 2020 PlatinumGames announced remastered versions for the Nintendo Switch, Microsoft Windows, and PlayStation 4. The remastered versions were funded via KickStarter, and they were released on May 19, 2020.[1]

This page or section requires rewriting. Reason: A lot of the article is plagarised from Wikipedia.
Please remove this template when it has been rewritten to satisfactory standards.

Players must explore each stage to find helpless citizens and recruit them to join their army of heroes. The more heroes you gather, the greater your Unite Morph Powers will be. These Morph Powers include powerful weapons like a giant fist or sword, and tools such as a bridge to interact with and traverse the environments. Heroes can also morph into gelatin to guard themselves from enemy attacks. The game uses the Wii U GamePad by allowing players to draw with their finger basic shapes such as circles and lines to quickly change between Morph Powers. You can also buy upgrades like new morph powers and items from the in game shop.

Earth is under attack from an invasion of enormous aliens known as the GEATHJERK Federation (GEATHJERK standing for "Guild of Evil Aliens Terrorizing Humans with Jiggawatt bombs, Energy beams, Ray guns, and Killer lasers" , and the only thing that can protect the planet is a group of unlikely, yet mighty, heroes with special abilities. These heroes include the likes of Wonder-Vegetable, Wonder-Lunch, and even Wonder-Beer. Unfortunately, the aliens are too powerful for the heroes to fight individually. They must join forces and work together to defeat their common enemy.

The game takes place in a futuristic setting where vehicles, architecture, and technology have all become advanced and enlarged. The most complex of this technology was used to defend the entire Earth with a gigantic force-field from the invading alien terrorist organization, "The GEATHJERK Federation". In order to combat the invaders, the CENTINELs, an advanced military group created in secret by the United Nations, created CENTINEL-Suits, a super-powered mask that transforms the wearer into a powerful superhero with unique abilities.

60 years after the initial GEATHJERK encounter (known as Earth Defense War I, with II happening 20 years later), the enemy has resurfaced, prompting the CENTINELs to take action. William Wedgewood, an elementary school teacher and latest recruit of the CENTINEL's special combat group, The Wonderful Ones, is tasked with managing the team, much to the chagrin of some of the team's more experienced members. Despite the ridicule he receives from his teammates and the pressure of being put in charge of saving the world, William (now known as Wonder-Red) keeps his cool and sets his eyes on his mission. Together, he and his team manage to defeat all of GEATHJERK's leading commanders, protecting the generators powering the Margarita force-field protecting Earth, but soon learn that Mother Platinum, the computer network in charge of generating the force-field, has been compromised, exposing the entire planet to the GEARTHJERK's massive armada.

In a last-ditch attempt to save the Earth, they head directly for the GEATHJERK's moon-sized base of operations. Upon infiltrating it, they are greeted by Jergingha, the leader of the GEATHJERK, who reveals himself to be a sentient brain-like machine who monitors the entire base. Jergingha gloats as he tells the heroes that he has activated his own self-destruct mechanism as a means of destroying Earth by crashing into it. However, knowing not to underestimate them, Jergingha challenges them to a final battle. During the final battle, Jergingha reveals that the GEATHJERK come from 1500 years into the future, where an Earth-founded coalition had become so advanced that they threatened to annihilate the GEATHJERK's homeworlds, revealing the reason they came to the past to attack Earth. When the Wonderful Ones refuse to believe him, he presents them with a futuristic, evil version of the CENTINEL-Suit. He then equips it, becoming Wonder-Jergingha and nearly defeats them until Luka, one of Will's rebellious students who initially hated the Wonderful Ones for being unable to save his mother, reforms himself and saves Will at the last moment, allowing him to turn back into Wonder-Red and defeat Jergingha by destroying his CENTINEL-Suit. They manage to escape the fortress before it is engulfed in a massive explosion. However, Jergingha reminds the group that he is the entire fortress, and reveals himself to have a larger, more mobile form, who then threatens to use a massive laser to destroy the entire Earth. Using all of CENTINEL's strength, combined with their reformed allies and the last surviving remnant of Mother Platinum, the Wonderful Ones deflect the beam back at Jergingha using a beam known as "Final Ultimate Legendary Earth Power Super Max Justice Future Miracle Dream Beautiful Galaxy Big Bang Little Bang Sunrise Starlight Infinite Fabulous Totally Final Wonderful Arrow." Jergingha is completely vaporized by the blast, and all the remaining GEATHKJERK forces on Earth simultaneously cease operating and expire. With the Earth finally safe, the Wonderful Ones have completed their mission. As they head back to Earth, Wonder-Red tells Luka to inspire the future generation of humanity in order to prevent them from becoming what Jergingha had warned about.

In the game's epilogue, it is revealed that the GEATHJERK have somehow returned a year after the defeat of Jergingha. However, the Wonderful Ones are prepared for everything this time, and have even recruited a new member: Luka, who is know known as "Wonder-Goggles". The children of the nearby school then celebrate as the Wonderful Ones fly off to fight the enemy once more.

Development of what would become The Wonderful 101 began during the lifetime of the Wii. The original idea came from Platinum Games' president, Tatsuya Minami, who wanted to bring a group of popular or iconic video game characters together in one game. Because different gamers would prefer certain characters over others, being forced to play as a certain character at a certain point in the game was quickly scrapped. Instead, all of the characters would be on-screen at once so the player could choose between them at any time. Platinum Games initially thought of using Nintendo first-party characters who would work together to get past obstacles, but when the idea was presented to Nintendo, they questioned how the mechanic would fill an entire game. Director Hideki Kamiya also doubted that the "conflicting elements" of the different Nintendo characters could be "put into a consistent formula" successfully like in the Super Smash Bros. series. Further brainstorming was put on hold while he worked on another game, but when that game was put on hiatus a year later, work on The Wonderful 101 resumed. Kamiya decided to use the Japanese henshin theme with a group of five original heroes who could unite and transform into various weapons. Soon the group expanded to one hundred heroes, and the Japanese superhero style changed to "an American comic book vibe." Although the developers had been thinking of making the game for the Wii, when Platinum Games and Nintendo finalized their partnership, it became Wii U-exclusive. The developers wanted to use the console's unique features effectively, so they came up with drawing on the Gamepad as a way to activate the "Unite Morphs".

Much like Hideki Kamiya's Viewtiful Joe, The Wonderful 101 is inspired by tokusatsu—Japanese live-action films or television drama with a heavy emphasis on special effects. The main heroes' outfits resemble those found in tokusatsu shows like Super Sentai, its American counterpart Power Rangers, and Kamen Rider, while the enemies resemble the giant monsters found in kaiju films, such as Godzilla and Gamera.

The Wonderful 101 was revealed at E3 2012 on the conference floor, codenamed Project P-100. On July 3, 2013, Nintendo introduced their "Wonderful Wednesday" social networking campaign to promote The Wonderful 101, where each Wednesday leading up to the game, they release a new character portrait. However, two days later, Kamiya posted how he worried about the lack of marketing for The Wonderful 101 on Twitter, mostly referring to the lack of information in magazines or websites, and claiming that the game took almost 1.5 times the resources and manpower as Platinum’s biggest game, Bayonetta. During the August 7, 2013 Nintendo Direct, Satoru Iwata announced that on August 9, 2013 a Nintendo Direct presentation would be made exclusively for The Wonderful 101.

The Wonderful 101 received generally positive reviews from critics. It has an aggregate score of 78.02% on GameRankings and 78/100 on Metacritic. The game received comments from some game critics concerning its steep learning curve, while others, such as Nintendo Enthusiast's Michael Nelson, praised the game for requiring a certain amount of skill.

Most reviewers enjoyed the ridiculously nonsensical story, characters, and humor, but found the few sexual jokes out-of-place in a perceived kid-friendly game, although it retains a Teen rating. The Wonderful 101's length and pacing seemed a bit drawn-out to some reviewers due to repetitive enemies and boss fights, while others thought they were alright thanks to the even distribution of new moves and upgrades.

Forming weapons by drawing on the touchscreen garnered mixed reception. Many reviewers found that the GamePad worked fine for straight lines or circles (to make a sword or a fist), but that it sometimes interpreted the wrong weapon for more complex shapes. Others thought that drawing simple shapes on the GamePad while using the right analogue stick for others was more reliable, or that the GamePad worked perfectly and it was simply a matter of practice. The camera was criticized for being too zoomed-out to keep track of all of the characters during battle but also too zoomed-in to see the occasional out-of-view enemy. Reviewers agreed that the game lived up to Platinum Games' trademark high difficulty, with some citing the controls and camera as contributing factors.

Nearly all reviewers were pleased with the creative uses of the GamePad's second screen. However, a few thought that navigating inside of a building using the controller's gyroscope was clunky.

Reviewers thought the multiplayer mode was enjoyable, but often lost track of their own group of characters. Most agreed that it felt "tacked on."

Reviewers praised The Wonderful 101's cartoony art style and flashy effects in battle, but also thought the character models looked low-polygon if the view zoomed in. The set-pieces and giant bosses were likewise well-received, as were the voice acting and soundtrack. 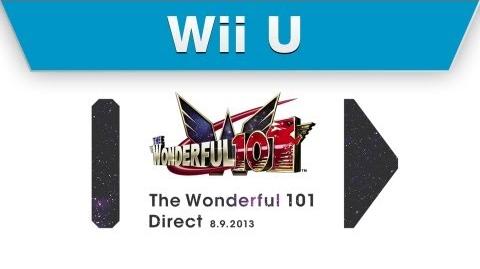 Retrieved from "https://nintendo.fandom.com/wiki/The_Wonderful_101?oldid=559807"
Community content is available under CC-BY-SA unless otherwise noted.