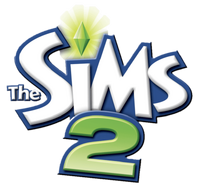 The Sims 2 is a game that was released on the GameCube, DS, and Game Boy Advance. Each version is different from each other. It is based off the hit PC game with the same title. It was developed by Maxis and published by Electronic Arts.

The game progresses much like the other console Sims games: the Sim is given a number of objectives to complete while advancing in their career, and they move from house to house as objectives are completed and the player advances in their career. While the objective in previous console games like Bustin' Out the objectives do not center around advancing in a career, rather completing other goals, like beating a bully Sim at foosball, these are known as golden wants.

Unlike other games, the player controls the Sims directly with the analogue stick, rather than moving them using the point and click to queue up actions, however the option to play using traditional Sims controls is still there.

When a Sim enters a conversation with another Sim, the camera zooms in on their conversation and the player chooses their actions from a menu. The background and the Sim's themselves differ depending on the Sim's relationship with the other Sim. For instance, if Sims are in love the background will be pink and they will move closer to each other.

The player can also pick different food choices and mix them, depending on the combination and the Sim's Cooking skill. Doing so may give a higher boost to the hunger meter.

There are 12 different locations that Sims may travel to across Pleasantview, Strangetown, and Melbourne throughout the course of the game. In order to unlock a new location, you must complete Golden Wants (basically, a Want that is a mission). If you are playing 2-player, only player 1 has Golden Wants.

As a Sim advances through the game, new locations will become available. There are eight main and four small locations in Story Mode, and four others in Free Play Mode.

The Nintendo DS version of The Sims 2 begins with the player's car breaking down in Strangetown. Upon arrival, an anonymous donor grants the player the deed to a hotel which can be operated and customized at the player's discretion.

Your job is to bring life backing into Strangetown by encouraging people to come to your hotel, you do this by upgrading it and making your guests happy. There are several ways in which you can make Strangetown a nice place to warm up in, but it is up to you to find it by making other Sims happy, putting goons in jail, vanquishing aliens, shutting down robots, and doing missions for others.

The Game Boy Advance version of The Sims 2 takes place in Strangetown, and shares a similar GUI to its predecessor (The Sims Bustin' Out). Players are guided through a goal-oriented game based on the reality television concept in which partitions of the game are divided into "episodes".

The player's Sim is working for Daddy Bigbucks. His most recent scheme to make money happens to be a TV show, with the player being the main character. The player has to complete aspects of the plot in different missions, and gain bonus points at the end of each mission for talking to people badly, nicely, etc., and in the end they even offer the player to choose the people in the town or the player's Sim.

Retrieved from "https://nintendo.fandom.com/wiki/The_Sims_2?oldid=548122"
Community content is available under CC-BY-SA unless otherwise noted.