Nintendo
Register
Don't have an account?
Sign In
Advertisement
in: Class B articles, The Legend of Zelda games, 1993 video games,
and 13 more
English

The Legend of Zelda: Link's Awakening 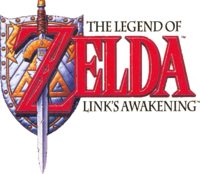 The game would later be entirely remade for Nintendo Switch. The remake simply labeled The Legend of Zelda: Link's Awakening was released in 2019.

After events in The Legend of Zelda: A Link to The Past Link sets sail and is shipwrecked. He is woken up on Koholint Island, by a girl named Marin. Her father, Tarin, looked after Link's shield, He tells Link that his sword is on the beach where he walked up, Link travels to Toronbo Shores to meet The Owl, who explains to him he must awake the Wind Fish to escape the Island, and that Link must obtain all eight instruments to awake the Wind Fish. Link then travels to the Mysterious Forest and finds that Tarin has been transformed into a raccoon. He changes Tarin back by sprinkling Magic Powder on his nose, and Tarin tells him he thought it was a dream. Link then finds the Tail Key, and the Owl tells him he has to go to the Tail Cave on Toronbo Shores to find the first Instrument of the Sirens. After defeating the dungeon boss, Moldorm, Link retrieves the Full Moon Cello. A mysterious voice comes to him, telling him to go to the swamp.

When Link returns to Mabe Village where Marin and Tarin live, he finds that a local pet owner, Madame MeowMeow, has had her dog kidnapped by Moblins. Link goes to the Goponga Swamp and rescues BowWow from the Moblin cave and uses his help to eat the plants in the way, allowing Link to enter the Bottle Grotto. After defeating the dungeon's boss, Genie, Link gets the Conch Horn. The same voice again tells him to go to the prairie. After returning BowWow and getting bananas from the beach, Link infiltrates Kanalet Castle, using the help of Kiki the monkey (bribing him with the bananas) to retrieve five Golden Leaves for Richard in order to get the Slime Key and enter the Key Cavern. Beyond the boss, Slime Eyes, is the Sea Lily Bell. Link must now go to the waterfall.

Link goes back to Mabe and retrieves an Ocarina and learns the Ballad of the Wind Fish from Marin, then takes Marin to the Animal Village. She sings to a large walrus in the way to wake it up, and Link is now able to go into the Yarna Desert and defeats Lanmola to acquire the Angler's Key. Behind the waterfall in the Tal Tal Mountain Range is the Angler's Tunnel. The Angler fish holds the Surf Harp. Link exits the dungeon and notices that he is being followed by a ghost, who wants him to take it to its house and later the cemetery. Link then goes on to the Catfish's Maw underwater and defeats Slime Eel to claim the Wind Marimba. The Owl takes Link to the Face Shrine where he sees a mural that implies that Koholint may not be real at all, and also that awakening the Wind Fish may cause the island to disappear.

Link goes on to beat Facade and get the Coral Triangle. Link then learns the Frog's Song of Soul in the Signpost Maze to awaken the rooster statue in Mabe Village, using it to fly across the mountain gap into the Eagle's Tower. After beating the Evil Eagle, Link claims the Organ of Evening Calm. He exits the tower to see Marin precariously stuck in the middle of a ruined bridge.

Link uses his Hookshot to rescue her, but her father comes and takes her back to Mabe. Link then goes on to Turtle Rock and defeats Hot Head to claim the final instrument, the Thunder Drum. With all eight instruments, Link goes to the Wind Fish's Egg at the highest point of the Tal Tal Mountains. He plays the Ballad of the Wind Fish on his ocarina and the egg opens. Inside, Link defeats the final Nightmare, Dethl, and awakens the Wind Fish. Link finds himself once again among the wreckage of his ship, but it seems Koholint Island has disappeared. Link looks up to see the Wind Fish flying overhead. If no deaths were experienced in the game, Marin is also above flying on seagull wings.

The style that is used in Link's Awakening is similar to that of previous installments of the series, excluding Zelda II: The Adventure of Link which went on a completely different path that almost any other game in the incredibly popular franchise. The player controls the silent protagonist Link by having a bird's eye view of the area.

With this view, the player is able to see all of Link's surroundings, including enemies, secrets, and so forth. Once our hero encounters an enemy, he will be able to defeat it by using multiple different abilities he gains on his journey. The further the player goes, the more abilities, or at least items, they will obtain.

Obviously the most popular and most used weapon is the sword, which Link finds very early on in the game. With this, Link is not only able to slash through enemies that are close to you, but he is also able to cut grass, solve puzzles, and even counter attack enemies (such as when an Octorok shoots out a rock, Link able to slash your sword at the rock, thus deflecting it right back at the Octorok).

While looking over screenshots released by Nintendo Power, the game was going to be more reminiscent to The Legend of Zelda: A Link to the Past. However, the game probably underwent a major change during development, thus resulting in the final version of the game.

The game was heavily influenced by the American television show Twin Peaks according to series co-creator Takashi Tezuka. The cult show was popular at the time and the creators of Link's Awakening wanted to create characters on the island that were mysterious, similarly to how the characters from Twin Peaks were. Tezuka said that subsequent games in the series, like The Legend of Zelda: Ocarina of Time and The Legend of Zelda: Majora's Mask retained this.

The game was well received by critics, receiving several awards. However, the game's graphics were criticized for being mediocre, and the monochrome version received further criticism from making it hard to see what was going on. The game was commercially successful, selling a combined six million units. It was re-released under the Player's Choice label. It is the sixth best selling game on the Game Boy and Game Boy Color.