Nintendo
Register
Don't have an account?
Sign In
Advertisement
in: Player's Choice games, Class A articles, Articles in need of expanding,
and 16 more
English

The Legend of Zelda: A Link to the Past & Four Swords

Action-adventure, fantasy
The Legend of Zelda: A Link to the Past & Four Swords (JPJapanese: ゼルダの伝説 神々のトライフォース&4つの剣

The Four Swords section of the game is entirely new, and was jointly developed by Nintendo and Flagship, a subsidiary of Capcom. The latter team had experience in creating handheld games for the series, namely The Legend of Zelda: Oracle of Seasons and Oracle of Ages. It is primarily a multiplayer game, whereas A Link to the Past is exclusively a single player experience. 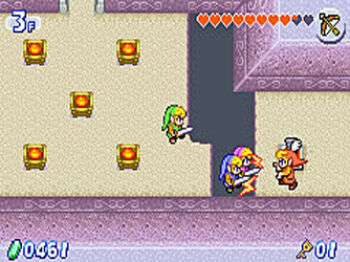 The Four Swords part of the game was developed by Capcom's Flagship studio in cooperation with Nintendo R&D2. The game is a multiplayer experience that has the players (2-4) go through randomly generated dungeons, completing the puzzles to reach the end. The puzzles that are present will be determined by the number of players currently playing. For example, if two players are playing, then a puzzle that can only be completed with four players will not be present, though that particular puzzle will be if there are four people connected.

A Link to the Past & Four Swords was one of the best received video games on the Game Boy Advance, with a whopping high score of 95% on Metacritic. This was partly helped by the fact it is an enhanced port of one of the more beloved Zelda video games.