Temperantia is a gigantic angel who resemble a human knight with floating arms linked to its body by some sort of visible divine energy. Its two massive arms end with four tube-like fingers that can be used to fire bullets. Temperantia is also said to be the very incarnation of the aspect of temperance, which is reflected in its knight-like appearance and its calm behavior. Natural phenomenon such as tornados and other kinds of strong winds are often affiliated to this being. It is the source of inspiration for the Temperance, a type of Angel made to represent the Virtue inspired by Temperance itself.

He first appear as a projection in Chapter V conversing with Jeanne before Bayonetta arrives. However he then disappeared as a battle commenced between the two Umbra Witches.

He is fought as the boss of chapter VIII where it is found at the center of a tornado to challenge Bayonetta and claim her power for Paradiso. It is eventually defeated by the witch who use Hekatoncheir to tear off its arms and drag it to Inferno.

Temperantia is first seen in Chapter IV where it is summoned by the Masked Lumen to face off against Madama Butterfly in a fist fight. The two eventually send eachother back with the power of their punches and disappears.

Temperantia is fought in Chapter XV after Bayonetta and Rosa defeat a large number of Angels. He is however defeated by the two witches.

"Temperantia, the true embodiment of the Cardinal Virtue of Temperance, is often illustrated as an epic giant. Its body rising like a castle, Temperantia possesses two tree-like arms; a composed figure said to illustrate the total reverence in which the Laguna are held by the faithful. When the true power of the virtue of Temperance is laid upon our world, it is said to come as a tornado, capable of swallowing an entire country. Humans are helpless to guess at the impetus behind Divine Will, whether it be anger or happiness, and are left only with prayers and promises of personal temperance if only the heavens should make the storm subside." 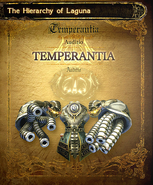 Temperantia's page in the Hierarchy of Laguna book.

Temperantia's card.
Add a photo to this gallery

Retrieved from "https://nintendo.fandom.com/wiki/Temperantia?oldid=527350"
Community content is available under CC-BY-SA unless otherwise noted.