Teaching Them a Lesson

Teaching Them a Lesson is an episode in Pokémon Conquest. It is unlocked by completing the episode Happily Ever After.

The story of three ninjas who bickered over their role in Ransei, and what Nene decided to do about it...

For the first couple of turns start training your pokémon and recruiting warriors. Try to recruit a dragon type pokémon with the move dragon rage, since it always does 40 damage. After a few months pass start attacking castles. When you are down to one castle no matter what that warlord's army will attack one of your castles their next turn, if you can't stop them from taking one of your castles let them take it then use one army to attack one castle and another army to attack the other on the same turn.

People with the ability to communicate with Pokémon were referred to using the title of Warrior. Among these Warriors were a group, mainly hailing from the kingdoms of Viperia and Yaksha... for who, the protection of their lords was the only goal. These loyal Warriors were known as ninjas. One day, three such ninjas, Kotarō, Hanzō, and Kunoichi, were arguing about who among them was the most worthy... when it all became too much for one of their colleagues, a young ninja named Nene...
Nene: Oh, not again!
Nene: You can't keep arguing like this all the time!
Nene: Now, just give me a minute...
Nene: All right, I'm back!
Nene: Now, I've borrowed some nearby castle so we can settle this once and for all.
Nene: So less arguing and more battling. All right?
Nene: Oh, not again!
Kunoichi: Are we really going to do this?
Hanzō: ...
Kotarō: Ha... This will be enjoyable.
Nene: All right? Now only use your Poison-type, Ghost-type, and Dark-type Pokémon, just like a ninja should!
Nene: And... We need one more type, so...Dragon will do just fine!
Nene: Now, we start with two castles each, and the first to get all the castles wins!
Nene: I'll be taking part too, of course!
Nene: All right, let's go!

Nene: All right, I won fair and square, so you can all listen to me!
Nene: You've got to stop arguing!
Nene: We're all good people deep down, right? Why can't we just be friends?
Hanzō: ...
Kunoichi: Hmm...
Kotarō: Ha. How quaint.
Nene: Quiet, you! No more back talk. We're all going to get along, okay? 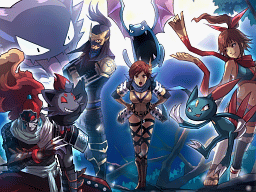 And so the ninja conflict drew to a close.
Nene was the victor.
But whether the other three actually became friends is another story altogether...

Retrieved from "https://nintendo.fandom.com/wiki/Teaching_Them_a_Lesson?oldid=526647"
Community content is available under CC-BY-SA unless otherwise noted.