Tatanga, is the main antagonist and final boss of the Game Boy game, Super Mario Land. He is an alien creature that rides a robot called Pagosu, which he uses against Mario in the final battle. He also appears in the game's sequel Super Mario Land 2: 6 Golden Coins, as well as in Valiant's Game Boy comics and Kodansha's Super Mario manga strips.

Tatanga is Lawful Evil in alignment. He brings Sarasaland's inhabitants under his control, and kidnaps Princess Daisy. Mario knows that Princess Daisy is in danger, so he heads to the kingdom she rules to stop what Tatanga was doing. Upon defeating him, Mario saves Princess Daisy. 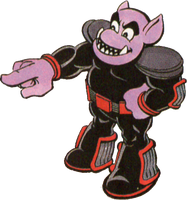 Tatanga as he appeared in the Game Boy comics.