Alright, I think I should clarify what Miyamoto was saying when he said 90 or 95% new content. People took this way out of context, assuming he meant that 10% of the stages would be returning from Super Mario Galaxy. As is evident by magazine interviews, this is NOT the case. Instead he meant that by 10% old content meant costumes like the Bee Suit, and the overall concept, would be returning. He stated in Nintendo Power that every galaxy is new, and the only returning platforms may be something like floating meteors which you can't really do anything new with anyway.   Bentendo  Talk

I seriously don't know if I believe this or not. NGamer has been right before on many things that you wouldn't normally think are true, such as revealing that Twilight Princess was going to be released on both the GameCube and Wii before anyone else, revealing Resident Evil DS, announcing Scarface for Wii, and saying that Next Level Games was developing Punch-Out!! for Wii. This is HIGHLY unlikely, though I'd say Sonic in Smash Bros. would be unlikely (Snake too). Even more questionable is making an Olympics game starring Mario and Sonic, and that came true. We'll just have to wait and see. If it's true, expect Iwata to reveal it during GDC or E3. If I were to bet, I'd say it's not true, but you never know! Personally, while a lot of the fans on NeoGAF don't want this to happen, I think it'd be kind of cool, even though I'm not that much of a Sonic fan (is it bad I like Sonic Adventure more than the sidescrollers?). --

The Nintendo Media Summit. A brand new trailer, new images and the release date for America were all revealed there. Believe me - you're not the only one who was shocked when they revealed the date. For images and more information, check out Nintendo's official site. GameTrailers has the brand new video (featuring awesomeness). --

It's been a pretty great past couple of days. Here's some cool artwork that I just found on NeoGAF: 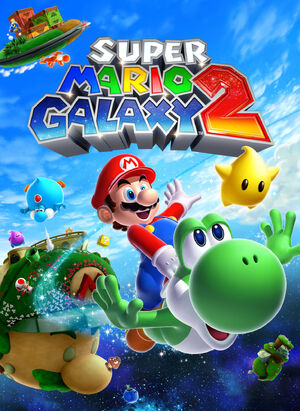 Definitely going to be the boxart. I made this in GIMP to see what it would look like as the boxart:

Since it's not official though, I'm not going to use it on the Galaxy 2 page (plus, I accidentally made the Wii logo too small... you can see blue lines at the sides). I'll use it on the main page though since the boxart I'm using is WAY out of date and fanmade.. Gotta wait until Nintendo does it. You can tell it's the boxart though because there's absolutely nothing at the top left corner where the Wii logo will be. --

The way the table of levels is set out means that we're only actually listing the galaxies, and not the stars within galaxies.

We need to somehow arrange the table in a similar way to the Super Mario Galaxy galaxies and stars table, however, grouped under each of the Worlds.

As of now, all that's known about the Worlds, Galaxies and Stars, is that Tall Trunk Galaxy is in World 3, as seen in the recent trailer, and 5 new galaxies have been revealed, as well as the stars (or at least one star) from each of them:

Obviously we wouldn't be able to arrange the tables to show star names since we don't know how many stars are in each galaxy yet, so we'd have to at least wait until we know that, but either way, it'll have to be done.--TheUltimateKoopa 02:19, April 2, 2010 (UTC)

Hey, anyone noticed the freaking date? April 2nd was when I wrote this... please look at this page more often.

Like I said, the galaxy table thing needs to be re-arranged like the Super Mario Galaxy one, to show the star names.

So far, there have been 10 star names revealed:

As for what galaxies are in what world, based on pictures and videos released so far, we know the following:

Oh my. Honestly, I'll only be willing to make a revamped list after every star name is revealed, because for every new star you have to alter a whole bunch of stuff. It would just be a lot easier if I had everything presented in front of me. Don't worry - it'll get done. --

As for the World/Galaxy distribution, from the screenshots and other sources, we know some of World 1, 2 and 3, which so far are:

Retrieved from "https://nintendo.fandom.com/wiki/Talk:Super_Mario_Galaxy_2?oldid=491700"
Community content is available under CC-BY-SA unless otherwise noted.