Coming in three variations, the SNES Classic Edition appears similarly to their original systems, though scaled down similarly to the NES Classic Edition. The North American version is based on the straight-angled grey-and-purple design or the original Super NES. The Japan and PAL versions are modeled after the Super Famicom and PAL Super NES systems released in their respective regions.

The system has 720p/60Hz HDMI display and two controller ports. Included with the system are two SNES controllers that look exactly like their original counterparts. The ports in question are hidden behind a flap that resembles the controller ports on the Super NES/Super Famicom.

The system includes 21 games in the North American and European regions.

In Japan, it has 21 games but, replaces 5 of those. It includes:

Despite these, the system itself has received positive reviews. Jonathon Dombush of IGN praised the Super NES Classic's features, with IGN itself giving the system an 8.5 out of 10, praising the game selection, higher image quality, longer controller cables, and the system's rewind feature.

Eurogamer praised the game selection, the many borders that players can select from, the Super NES Classic's improved scaling, and the inclusion of two controllers with longer cables in contrast to the NES Classic Edition, which shipped with one controller that had a short cable. 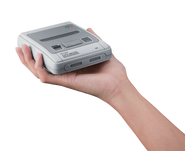