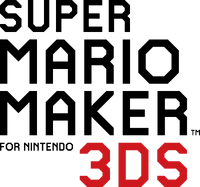 ) is a port of the level creator, Super Mario Maker, for the Nintendo 3DS, developed by Nintendo Software Technology in cooperation with original team.

Despite being a Nintendo 3DS game, it is only playable in 2D as with most games released near the end of the 3DS's lifespan. It was initially released in December 2016, 15 months after the Wii U version.[9]

The title retains most of the elements from the Wii U version, but it lacks the ability to upload a player's levels online as well as amiibo compatibility.

The game includes almost everything from the original Wii U release, with the exception of the Costume Mario and Big Mario forms and searching for courses by code. It is also possible to play stages from the Wii U version, though not every stage is compatible with the 3DS version due to version differences, such as the removal of Mystery Mushrooms and Big Mushrooms from the 3DS version.

Exclusive to Super Mario Maker for Nintendo 3DS, the game includes 100 new courses designed by Nintendo pre-installed. The courses also include medal objectives, in which the player must fulfill certain criteria, such as collecting every Coin in the level, to earn a medal. Players can also send unfinished courses to other players, by way of Local Play, and they can team up, or collaborate, on stages. Stages made in this way have a special icon marked next to it. The editing mode of the game also includes Yamamura's Lessons[10], an interactive tutorial guided by Mary O. and Yamamura.

The Super Mario Challenge (called Challenge Courses in the Coursebot) is a challenge mode containing 100 levels. It has Challenge Medals to collect that come in handy for accessing the 19th world.

The 100 levels are divided up into 19 worlds. However, Princess Peach is taken to World 18. The player needs to go through 88 of the 100 levels to rescue Peach. World 19 is unlocked in the Coursebot when she is rescued. The first level in World 19 is dependent on collecting 40 Challenge Medals. The actual mode has the player starts out with ten lives, but they can increase it to 100 lives. If the player has a Game Over, the player has to restart from the beginning of the world that they are on. Lives gained or lost in the Coursebot don't change the lives in the mode. After rescuing Peach, the player can redo the whole entire thing again if they want to with altered text for completing World 19.

Assist Items are items that could appear when the player loses five lives. The player can choose not to accept the item, but they would be asked again if they lose five more lives. If the item is activated, the Challenge Medal would become unobtainable. Assist Items can't be activated past the checkpoint as it too removes the possibility of collecting Challenge Medals.

After the player rescues Peach, the credits roll while Mario walks. There are coins at the top-left corner possibly meaning lives added. When Mario enters the castle, the score of all the 88 levels is totaled. After that, a "To be continued..." message appears due to the player needing to play the 19th world for some bonus stuff.

NOTE: All names are conjectural unless otherwise specified.

NOTE: This glitch only works on the New Super Mario Bros. U game style.

For this glitch, the player must have a Bowser Jr. and a Koopa Clown Car, regardless of which type it is. When Bowser Jr. takes any form of damage or is far away from Mario, he hides into his shell and starts speeding towards Mario. If he falls into a Koopa Clown Car while inside his shell, his head will be jammed inside, giving somewhat of a headless appearance.

There is also another way to experience this glitch by using a Spiny Shell on Mario. When Bowser Jr. hides into his shell, the player should wait until he jumps back out to attack. When he is in mid-air, Mario needs to run under him so he takes damage. When he jumps from the damage, Bowser Jr. is headless for a second before retreating into his shell. It is recommended to use Big Bowser Jr.

The game received middling scores with a 73 on MetaCritic and a 72.42% on GameRankings. The game received a 33 (8/8/8/9) from Famitsu. The main criticism was while the port was technically capable, the lack of online functionality or cross-compatiblity with the Wii U version left the game feeling like a lite version.

In spite of this, sales were very solid. In Japan, the game outsold the original version at launch and quickly past it lifetime sales in the region. Worldwide, the game sold 2 million by March 2017.