The Super Bell is a power-up introduced in Super Mario 3D World. It gives Mario, Luigi, Princess Peach, Toad, and Rosalina the Cat Suit, which gives them the ability to climb up walls, sneak, do a scratch attack and a pounce, and run up the end-of-level Goal Pole to reach the top. The character's voices sound like cats when using this power-up. There is another version of this power-up called the Lucky Bell, which turns the characters into their Lucky Cat form, which has all the abilities of the regular Cat Suit, but also gives them the ability to turn into a statue when doing a ground-pound, which will also earn them Coins as the statue falls.[1]

Super Bells are first seen during the game's prologue scene, where they are flung out of the Clear Pipe leading to the Sprixie Kingdom, along with many other items such as POW Blocks and Double Cherries. Super Bells can be seen again in the Wii U version of Captain Toad: Treasure Tracker, since the same scene plays at the end; however, the items are not obtainable in the main game. In Mario Kart 8, the Super Bell is referenced in the form of a DLC cup called the Bell Cup, and a track in said cup called Super Bell Subway as a part of the Animal Crossing × Mario Kart 8 downloadable content pack for 2015, and available in the main game in Mario Kart 8 Deluxe. 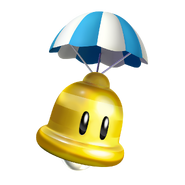 A Cat Bell.
Add a photo to this gallery

Retrieved from "https://nintendo.fandom.com/wiki/Super_Bell?oldid=498040"
Community content is available under CC-BY-SA unless otherwise noted.