Sully is a character in the 3DS game Fire Emblem: Awakening. She is the mother of Kjelle. She starts the game as a Cavalier, and is part of the Red/Green cavalier duo with Stahl. She is very strong willed, and acts exactly as she thinks. She is also very popular around the country of Ylisse, and has trouble dealing with her large amount of fan mail.

Sully is a member of Chrom's Shepherds, and was born into a long line of Ylissean knights. She is the mother of Kjelle, and can potentially be the mother of Lucina and Morgan.

Sully is first introduced in Chapter 1, where she finds Chrom after the Outrealm Gate opens, sending in Risen soldiers. She is unknowingly tailed by the archer Virion, who almost instantaneously attempts to flirt with her. Sully, repulsed by his advances, brushes him off with a piercing word and a well-landed kick, before rushing to serve as a reinforcement to bolster Chrom's attempt to defeat the Risen in the surrounding vicinity. She then accompanies Chrom during the ensuing Ylisse-Plegia war, the Conquest of Valm, and purging the continent of Grima's influence.

Should Sully marry Chrom, at the end of Chapter 11, she will assume the role of the new Queen of Ylisse. Two years later, the couple will conceive their first child, Lucina. After the ambush on Carrion Isle, "Marth" reveals her identity as Chrom's daughter, Lucina, from the future. Witnessing Lucina weeping in Chrom's arms, Sully immediately assumes that she is his mistress, causing her to lose her temper out of hurt and disbelief. However, upon having her attention directed to the Brand of the Exalt manifested on Lucina's left eye, Sully is thereafter convinced of Lucina being the future incarnation of her newborn daughter. After informing them of her plight from the future, Lucina and Sully share a tender moment, where the two embrace each other affectionately.

During the events of Paralogue 8, when Sully is directed to speak to Kjelle, the ensuing conversation will see Sully taking the initiative to address Kjelle, to which Kjelle, startled by her mother's sudden appearance, exclaims in shock. Similarly startled by Kjelle's unexpected response, Sully then demands whether there is anything of interest on her face, compelling Kjelle to break out of her reverie. Upon listening to Kjelle's apology for her imprudent behaviour, Sully proceeds to brush it off, before warning her that her plan to directly tackle the enemy is risky and foolhardy. When Kjelle responds by defending her stance, Sully, impressed by her bulwark resoluteness in firmly sticking to her belief, promises to assist her in carrying out her plan. After the battle concludes, the two will once again converse with each other, where Kjelle reveals her pressing need to search for her parents, with naught but her mother's ring to do so. Sully then requests to take a look at the ring, and upon verifying it as the exact same one as the one she is wearing, proceeds to acknowledge Kjelle as her daughter. When Kjelle responds with immense incredulity, Sully slyly asks whether she had expected someone prettier. Kjelle, visibly flustered, hurriedly asserts that Sully is as beautiful as she remembers her to be, and had played a pivotal role in equipping her with the necessary skills for survival. Sully, flattered and touched by her daughter's words, then requests for her to sit down and divulge every detail of the future.

After the war ends, Sully will continue performing her knightly duties diligently, eventually becoming a knight who is revered by one and all, where her beauty and skill causes her to be heralded a heroine by women. 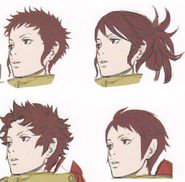 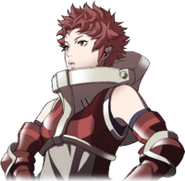 Retrieved from "https://nintendo.fandom.com/wiki/Sully?oldid=533897"
Community content is available under CC-BY-SA unless otherwise noted.