Storo is a member of The Squeaks, debuting in Kirby: Squeak Squad. Due to his giant size and immense strength, he acts as the muscle of Daroach's gang. He is also more durable than Spinni and Doc. He later appeared in multiple Kirby games like Kirby Mass Attack and Kirby Star Allies.

Storo appears in certain levels whenever Kirby collects a large Treasure Chest. He tries to steal the chest back from Kirby, but due to his large size, he only walks slowly. When Storo is directly facing Kirby, however, he will smash the ground with his hammer, creating stars for Kirby to inhale. He also attacks by periodically jumping forward in a low arc, which also creates stars that can be inhaled. Whenever Storo successfully hits Kirby or walks into him, Kirby will lose one of the Treasure Chests he has collected, giving Storo a chance to steal a chest and take it back to a nearby hideout. As with the other Squeaks, Storo is weak against fire, electricity and ice attacks, and drops food when hit.

Storo appears in Daroach's Airship after the Kirbys defeat Whispy Woods and clear Green Grounds. He cannot be interacted with, and he only stands still in the left side of the area.

Storo also appears as one of the many collectible stickers that can be applied to the Robobot Armor in Kirby: Planet Robobot.

In Kirby Star Allies, Daroach can summon him to jump up and slam down on opponents with his bulk. He can activate devices that are usually slamed with a hammer. He also appears in the tittle screen in a special interaction between Daroach and Kirby. 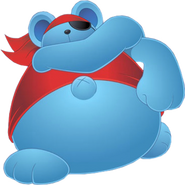 Artwork of Storo in Kirby: Squeak Squad.
Add a photo to this gallery
Retrieved from "https://nintendo.fandom.com/wiki/Storo?oldid=533535"
Community content is available under CC-BY-SA unless otherwise noted.