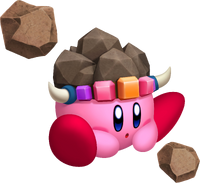 Stone Kirby is one of Kirby's copy abilities, introduced in Kirby's Adventure. It is arguably one of the most iconic abilities. It is commonly obtained from Rocky. Kirby wears a crown of rocks with horns on each side connected by squarish colorful rocks.

Stone's main ability is to turn into a heavy object and drop down, damaging enemies below. In most games, this move changes randomly from a list. Starting in Return to Dream Land, Kirby now has acces to an uppercut in this form.

In Kirby's Dream Course, Kirby can use this ability to sudden drop from the sky and stop. However, Kirby will still slide down the incline if he lands on one

In the Super Smash Bros. series, Kirby's down special, Stone, originates from the Stone Change attack.

Retrieved from "https://nintendo.fandom.com/wiki/Stone_Kirby?oldid=522347"
Community content is available under CC-BY-SA unless otherwise noted.