Spyro is the main character from the Spyro game series. He is a cute energetic young purple male dragon. He is known for his abilities to defeat enemies by breathing or using different elemental abilities (fire, water/bubble, electricity, ice, earth) and charging at them, and his ability to glide to otherwise unreachable areas in the game world. Spyro is often accompanied by his best friend Sparx, a dragonfly. He originally appeared on the PlayStation in 1998, but later appeared in a Nintendo gaming device in 2001. 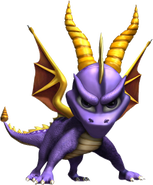 Spyro as seen in Spyro: Enter the Dragonfly (2002).
Add a photo to this gallery