Romaji: Gabon) are Koopa enemies that throw spiked balls or bars from within their mouths. They were designed by Hiroyuki Kimura at Nintendo,[2] and they first appeared in Super Mario Bros. 3. Spikes have black Buzzy Beetle-like shells on their backs that are too small for them to enter.

Spikes first appeared in Super Mario Bros. 3 as enemies. They are found in one Water Land stage and many Ice Land stages, and they attack by pulling spiked balls out of their stomachs and throwing them at Mario or Luigi while wandering around. They can also fall off the edge like green Koopa Troopas. A single stomp defeats them. Despite their appearance, Spikes can be stomped even when they are holding their spiked balls above their heads. Their sprites are shown to not have hair while they are shown with blue hair in their Super Mario Bros. 3 artwork. Spikes can also be defeated by fireballs and hammers. The Water Land King also resembles a Spike while transformed in the NES version.

Normal Spikes reappear in New Super Mario Bros. Wii, along with Stone Spikes, a blue variety that uses spiked balls made of stone is thrown directly downwards from the ledges on which they stand. This game marks the first appearance of their modern design, which would go on to be re-used in future games. Spikes can be defeated by a simple jump to the head, however, unlike in Super Mario Bros. 3, if the Spike is holding a spiked ball it will damage the player. They can also be defeated by fireballs, barrels, being frozen via the Ice Flower or the Penguin Suit power-ups, and sliding into them as Penguin Mario. In this game, Spikes stay at one spot instead of walking around, although they can turn directions. The green variation appears only in World 2. Unlike regular spiked balls that destroy blocks, the Spike's spiked balls cannot break blocks.

Spikes make their first appearance in a 3D Mario platformer game in Super Mario 3D World. Here, they appear in a few levels, such as Spike's Lost City and Hands-On Hall, and throw Spike Bars instead of spiked balls.

Spikes return in Super Mario Run, though they only appear in the level Land of Spikes. They throw spiked balls like in previous games, except at slightly faster intervals.

In Super Mario Momotarō, a Spike is the last creature to join Mario on his mission to rescue Princess Peach. The Spike hopes to get his revenge against Bowser for destroying his homeworld. During the final battle, he helps by knocking Ludwig von Koopa out with an exploding spike ball. After the final battle, he joins Mario in returning the treasure Bowser had stolen to their rightful owners. He is most likely based off of the monkey from the Momotarō.

Spikes, known here as Mace Penguins[3], appear in Super Mario World 2: Yoshi's Island. They only are in BLIZZARD!!!, but in the remake, they also appear in Endless World of Yoshis.

Spikes, known here as Gabon's (a direct translation from Japanese, possibly due to the name being taken by another enemy], reappear in Yoshi's Story in the level Jungle Hut on Page 4. They regurgitate spiked balls and roll them downhills. The Yoshis may eat them, but the Green Yoshi likes them best. Additionally, the boss Don Bongo bears some resemblance to one.

A giant Spike appears as a boss in Mario Party 9. It is the mid-boss of the Magma Mine board, while the stage boss is Chain Chomp. The minigame it is fought in is Spike Strike. During the minigame, the Spike attacks the players by spitting spiked balls onto the paths leading to them. The players must attack it by quickly choosing a hammer to smack the spiked balls back at him.

In Mario Party: Island Tour, a Spike is one of the possible tiles to appear in Match Faker. Stone Spikes appear in Mad Ladders.

Spikes appear as nonplayable characters in Mario Party: Star Rush, appearing as NPCs in the minigame, Roller Revenge. Here, they throw spiked rollers at players, and players who are hit by the rollers lose a life. When the minigame is over, Spike does his second-place animation from Mario Party 10.

Spikes appear in Super Mario Party as non-playable characters. They can be found in the background of several different minigames.

Generic Spikes make their Paper Mario debut in Paper Mario: Sticker Star. They only appear within the levels of World 2. They also have a lot of HP and they have the same HP yellow Pokeys and Snifits have. Spikes also fight in groups of two later and are aided by Paragoombas, Paratroopas, Swoops and Hammer Bros. Spikes will chase Mario and throw their spike balls instead of tossing them slightly and letting it roll. In battle, Spikes can hold a spike ball over their heads, making jump attacks ineffective until they throw the ball on their next turn. Spikes can also ground-pound Mario but if the attack misses, it will bounce to the left. When defeated they occasionally drop a Spike Ball sticker. Snow Spikes from New Super Mario Bros. also appear in this game and sometimes drop a snowball sticker. If a Spiked ball is touched outside battle from a Spike, Mario loses 2 heart points.

Spikes return in Paper Mario: Color Splash with the same appearance and behavior from the previous game. However, they don't hold the Spiked Balls during the entire battle this time around, but only when they attack. Also, the design of the spiked balls has changed, since the spikes were brown in Paper Mario: Sticker Star and are now white. Spikes appear in Kiwano Temple, The Golden Coliseum, and Sunset Express. Two Spikes assist Ludwig von Koopa in battle, and their Spiked Balls must be hit back at them as Raccoon Mario to defeat them. One appears as a member of the Shady Sledge Bro's gang in Dark Bloo Inn, and one also appears as an NPC on the Sunset Express.

Spikes appear in Mario Golf: World Tour as NPC characters in the Castle Club game mode. Their names can also appear on the tournament scoreboard. A giant Spike also appears in Wiggler Park.

If a Spike is stunned using the pointer/touch screen as it is preparing to throw an obstacle, the object that has yet to leave its hands will be destroyed.

Certain Spikes, such as the ones in Trick Track Hall, cannot be defeated. The red turnips thrown by the 2nd player in the game's Co-op assist mode does not defeat them on the Nintendo Switch version. They can still be defeated using other methods such as spinning or using the Super Pickax.

The Sure Shot Challenge level of the Adventure mode pits Mario against Spike in Piranha Plant Forest. If Mario is successful in the challenge, Spike gives Mario the Wooden Racket.

Spikes appear in Mario & Luigi: Paper Jam as enemies during the second visit to Doop Doop Dunes]and reside with their paper counterparts, Pokeys and Spinies. One Spike and Paper Spike are also fought as one of the Bowser Duo's last lines of defense in Neo Bowser Castle. In battle, Spikes may throw small spiked balls at all three bros at once which must be jumped over. It can also throw big spiked balls at one bro which must be hammered back, although only the last one will damage the Spike since the rest will ricochet off the next one thrown.

Spikes appear in Mario & Luigi: Superstar Saga + Bowser's Minions, where they are enemies and recruitable allies found in Minion Quest: The Search for Bowser. They are ranged troopers, and attack by throwing Spiked Balls at enemies. Their special skill, Throw the Fight, allows them to throw larger Spiked Balls at enemies, dealing more damage.

Spikes, alongside Stone Spikes, make their playable debut in a Mario sports game as selectable teammates in Mario Sports Superstars, in the soccer and baseball modes of the game. They are classified as power type characters. They also appear as bosses in the Road to Superstar mode.

Spikes do not appear during the events of Mario + Rabbids Kingdom Battle, but there are recurring background elements in Spooky Trails that allude to them, like Spiked Balls and Spike Bars. Also, one of Luigi's Precision weapons, the Spike Strike, is based on a Spike.

Spikes have a role to play in Super Mario Maker 2. They are available as a course part in v.2.0.0 in Course Maker. They are placeable in all styles.

Another version of a regular Spike. 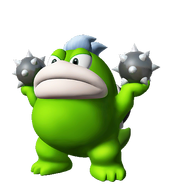 Mario Party 9 as a boss. 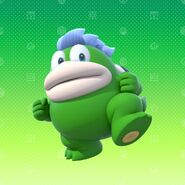 among shid
Add a photo to this gallery

Retrieved from "https://nintendo.fandom.com/wiki/Spike_(enemy)?oldid=610081"
Community content is available under CC-BY-SA unless otherwise noted.