Spellworm is a small, educational puzzle game available on the Nintendo Switch platform from the eShop service. Released in 2019, it is a simple game that consists of feeding a worm through a grid of letters to spell words.

The gameplay's design is very simple and has a target audience of young children to help them learn how to spell, though it can also serve as a simple brain activity for the casual gamer. The worm is controlled and directed through letters in a word search grid to spell words, depending on the theme. 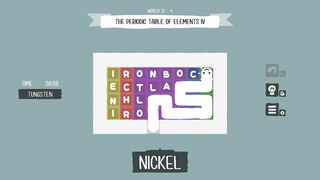 There are different themes prevalent that vary in difficulty, ranging from extremely basic ones like shapes and colours, to more challenging vocabulary such as elements of the Periodic table, for example. Over 100 puzzles are included in the game, which are divided into different worlds.

Retrieved from "https://nintendo.fandom.com/wiki/Spellworm?oldid=553278"
Community content is available under CC-BY-SA unless otherwise noted.