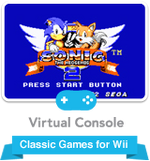 This game requires the Classic Controller

Romaji: Sonikku za Hejjihoggu Tsū) was an 8-bit version of the proper Sonic the Hedgehog 2; this game was launched for both Sega Master System and Game Gear consoles, and was launched a couple of months in advance before the 16-bit Sega Genesis version was released. The game serves as a sequel to the first Sonic the Hedgehog video game and debuts Sonic's sidekick and best friend, Tails for the first time - Tails would then go on and become a significant character in the Sonic the Hedgehog series.

The game was later released in the form of Virtual Console for both Wii and 3DS consoles in 2008 and 2012 respectively, and a downloadable port based on this game was created for the 3DS eShop service under the title 3D Sonic the Hedgehog 2.

After the events of the last game, South Island had become peaceful ever since Sonic's arch-nemesis, Dr. Robotnik, had his plans to form an empire of robots foiled. However Dr. Robotnik tries another attempt at chasing his evil dreams, and this time as well as transforming animals into robots yet again he kidnaps Tails, Sonic's best friend, and locks him up in the Crystal Egg.

Sonic travels to South Island in his search for more adventure, only to notice the sudden lack of animals living in the South Island. In his confusion he finds a note written by Tails that he had been kidnapped and that Dr. Robotnik demands the six Chaos Emeralds as ransom in exchange for Tails. Sonic sets out again to thwart the evil doctor's schemes once more.

The game very much follows the footsteps of its prequel Sonic the Hedgehog and utilises very similar platforming mechanics. The game shares much in common with the original Sonic the Hedgehog and shares the same objective; players must guide Sonic through each of the seven zones that consist of three acts with a time limit of ten minutes in each. Like the original game, the game retains the rings, which can protect Sonic should he hit obstacles or enemies, though they will not protect him from hazards that cannot be survived, such as drowning, falling into bottomless pits, or running out of time. Rings will fall out if Sonic takes damage, though unlike the predecessor in which Sonic lost a single ring when he took damage, in this game Sonic will lose multiple rings when he takes damage though they can quickly be picked up again.

The main objective of the game is of course to defeat Dr. Robotnik in the final zone and rescue Tails. However, the final Crystal Egg zone where Tails is held captive can only be accessed if Sonic had obtained the first five Chaos Emeralds and defeated Silver Sonic in the penultimate zone to obtain the last one; otherwise, the game would end prematurely with a bad ending in which Tails had not been rescued. On the other hand, if all the six Chaos Emeralds had been obtained and if Tails had been rescued, the game will display a good ending celebrating Tail's deliverance.

*Can only be accessed when all the six Chaos Emeralds from the first six zones have been obtained.

The game had received extremely positive reception and was celebrated as one of the greatest games ever launched for both Master System and Game Gear consoles. The game was praised for its superb gameplay and excellent graphics, despite the limitations of the aforementioned Master System and Game Gear consoles. Despite the fact that the 8-bit version was launched on the consoles that were seen as not being as advanced as Sega's main Genesis console, the game was described as being a game of its own and the fact that it had not been a mere simple down-port of the 16-bit Genesis version that was to be launched a few months later. All in all, the game was considered to be even better than its prequel Sonic the Hedgehog, and the extreme popularity of both games had propelled Sega to such an extent that it was able to rival Nintendo just as equally when it came to production of games and consoles, and both games had spawned many ports and re-releases.

Another important aspect of the game was that it was the very first game chronologically to star Tails, Sonic's sidekick and best friend. Tails would then go on to feature in the majority of Sonic games launched afterwards and became a highly significant character in the Sonic the Hedgehog series.

Both versions of the game have obviously appeared on the Virtual Console with the Master System and Game Gear versions launched respectively for Wii]] and 3DS. However, the latter also appeared in some Sonic compilations.

Although both Master System and Game Gear versions played Sonic the Hedgehog 2 in 8-bit, there were several variations between them, mostly due to the hardware limitations of the latter console.

Retrieved from "https://nintendo.fandom.com/wiki/Sonic_the_Hedgehog_2_(8-bit)?oldid=514701"
Community content is available under CC-BY-SA unless otherwise noted.