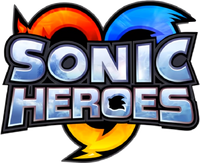 Sonic Heroes is an action game featuring various Sonic the Hedgehog characters, released for the Nintendo GameCube. The game plays somewhat similar to the Sonic levels in Adventure games except there is a central team gimmick that is used to progress through the levels.

There are five different modes in the game. But not all of the levels can be played at first, you need to get a certain amount of emblems. These are the following modes which are: Ring Race where whoever gets the most amount of rings first wins. Action Race where you race against a friend to the end of a level. Quick Race is almost identical to Action Race, but with a couple of differences. Battle is where your objective is to make your opponent's teammates fall off the arena. Special Stage is where you can compete to get the best score in any of the special stages from the main story mode. Bobsled is where you race against a friend to the end of each level in a bobsled.

Tails and Knuckles finally catch up with Sonic as he tours around the globe, and inform him of Dr. "Eggman" Robotnik's evil plot to bring the world to its knees in just three days. In order to stop him, the three unite for there greatest adventure to put an end to Dr. Eggmans wicked ploy.

Treasure hunter Rouge the Bat sneaks into one of Eggman's secret bases to liberate him of some riches he had been hiding. But instead, the base was abandoned with all the valuables gone. However, she comes across a status capsule that to her surprise houses the figure of Shadow. Far from being deceased as everyone thought, he was indeed very much alive, but unconscious. In order to release Shadow from the capsule, Rouge switches on the facility's power, unintentionally reactivating the final E- Series robot Omega. Shadow wakes up to find his memory gone, unable to recall why or how he went into status. Omega on the other hand, was rather upset about Dr. Eggman shutting him down. Mistaking Shadow for one of Eggman's robots, he immediately starts to attack him. Rouge brakes up the fight and convinces them to form a team against Eggman and they set out in search of the evil scientist.

The Chaotix Detective Agency had been quiet for a while. In fact, they were getting a little behind on their bills. As Espio and Vector were laying around in their office, Charmy burst into the room with a mysterious package containing transceiver which mysteriously promises them a large sum of money if they take his case. "You know our policy!" Vector exclaimed.

Amy, crazily in love with Sonic, is concerned that she hasn't had any contact with him for a month. She is about to give up hope looking for him when she catches sight of Sonic's picture in the newspaper. In her excitement, she runs to the publishers to find out where the picture was taken. When she arrived she met a familiar looking cat named Big and a cute little rabbit named Cream. With a quick exchange of stories, she finds out that Big is looking for his best friend Froggy and Cream is looking for her friend Choa's twin Chocola, both of whom appear in the picture with Sonic. They decide to team up and search for them together.

Retrieved from "https://nintendo.fandom.com/wiki/Sonic_Heroes?oldid=587154"
Community content is available under CC-BY-SA unless otherwise noted.