Romaji: Tsutarja) is a species of Pokémon in the series of the same name. It is a Grass Pokémon that made its first appearance in the fifth generation games Pokémon Black and White. It evolves into Servine starting at level 17.

Snivy is a reptilian Grass-type Pokémon. Most of its body is green in coloration, while it has a cream-colored underside. A yellow stripe runs down the length of its back and tail, and it also has yellow markings around its large eyes. Yellow, curved structures protrude from its shoulders and bend backwards. These structures resemble leaves or small wings and give Snivy the appearance of wearing a collar. In spite of being snake-like in appearance, it has fully-developed limbs. Its slender arms are the same green color as the rest of its body and have three fingers, while its tiny feet match its underside in coloration and have no digits whatsoever. It has a large, palmate leaf with three prongs on the end of its tail. Snivy may be based on a lizard or a snake. It currently has no known gender differences. In the anime, its behaviour seems very serious and somewhat cool and laid-back. It is also shown to be smart in nature.

Snivy will make its debut appearance in the games Pokémon Black and White as the Grass-type starter Pokémon.

Snivy appears in the Pokémon Best Wishes! Saga of the anime. It is the starting Pokémon of the beginning trainer, Shooti, and Ash Ketchum would later catch one himself. It is a female Snivy that knows the move Attract.

Snivy has also appeared in the Pokémon Master Black and White Manga as Monta's starter Pokémon. It is a walkthrough comic based on the games Pokémon Black and White.

Snivy can be used as an assist in Pokkén Tournament. 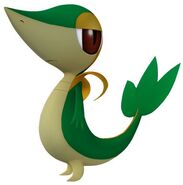 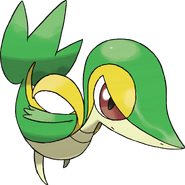 Retrieved from "https://nintendo.fandom.com/wiki/Snivy?oldid=526643"
Community content is available under CC-BY-SA unless otherwise noted.