Shovel Knight is the main and titular character of Shovel of Hope. Usually clad in light blue armor, he is a chivalrous knight trying to stop the Enchantress from taking over the Valley and find his beloved Shield Knight, lost to the Tower of Fate.

Always honest and helpful, Shovel Knight aids people he meets along his journey, such as the Bard and the King of Pridemoor Keep. He constantly dreams of Shield Knight, fighting away imaginary enemies while attempting to catch her.

Shovel Knight makes his first appearance in the Super Smash Bros. series as an Assist Trophy in Super Smash Bros. Ultimate. When summoned, he use his shovel as a pogo stick to bounce around like in his game but can also walk and attack players by hitting them with his shovel while digging, which can also uncover burried food. He can be damaged by playable characters or other Assist Trophies. 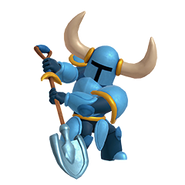 Super Smash Bros. Ultimate.
Add a photo to this gallery
Retrieved from "https://nintendo.fandom.com/wiki/Shovel_Knight_(character)?oldid=506205"
Community content is available under CC-BY-SA unless otherwise noted.