Shadow Bugs are creatures that appear in Super Smash Bros. Brawl's story mode, The Subspace Emissary. They are small purple-black crawling particles that are a part of Mr. Game & Watch's physiology and exist in unlimited numbers within his body.

Tabuu and Ganondorf realized that they could use the Shadow Bugs shapeshifting properties in order to create followers to serve them, creating the Primids and other monsters encountered in the Subspace Army. All of the Shadow Bugs are stored in the Halberd which commonly drop Shadow Bugs throughout episodes. They also have the ability to copy a character when in trophy form into a purple tinted evil one which also possesses dark purple aura around it and yellow pupils. They can also be altered in size as the evil Diddy Kong clone turned bigger.

Embodiments of a primordial substance that can take the form of any number of lesser Subspace foes. They can also copy the forms of trophies to create evil doppelganger versions of them. The mysterious substance inside Mr. Game & Watch can be extracted endlessly. Once Tabuu discovered this, he used Mr. Game & Watch to create the Subspace Army. 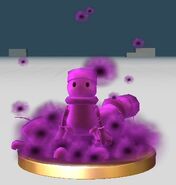 The Super Smash Bros Brawl trophy for the Shadow Bugs.
Add a photo to this gallery

Retrieved from "https://nintendo.fandom.com/wiki/Shadow_Bugs?oldid=527742"
Community content is available under CC-BY-SA unless otherwise noted.