Sapientia is similar to an gigantic sea creature with angels wings, a face on each of its four leg and one below its enormous mouth. It also seems to be heavily mechanized, probably thanks to the Ithavoll Group. Spientia is said to represent the aspect of prudence and wisdom. Sapientia is often seen to be a narcissist and consider itself above all form of lifes. Natural phenomenon such as tsunamis, rising tides as well as the element of water are often affiliated to this being. It is the source of inspiration for the Prudence, a type of Angel made to represent the Virtue inspired by Sapientia itself.

Sapientia first appear in Chapter XII during Bayonetta's conversation with Cereza soon after Iustitia's defeat. Only its voice is heard and soon after, a gigantic shockwave produced by it can be seen reaching Cereza who is saved by Luka Redgrave as a flying car is about to crush her.

Sapientia is later seen interupting the fight between Jeanne and Bayonetta during the same chapter. It is however forced out of the plane by Jeanne but fire a fireball that destroy the engines of the said plane crashing it in the process.

It is then fought as the boss of Chapter XIII but stands no chance against Bayonetta and has its body riped apart by Phantasmaraneae and its head is draged to Inferno.

Sapientia appear for the first time in chapter VII where it is summoned by the Masked Lumen to face against Hydra. Sapientia fire its four laser beams at Hydra but the Demon manage to deflect them and destroy the Insidious they were in.

He is really fought in Chapter XIV while in the Umbran Armor. Bayonetta and Rosa manage to defeat it and sent it into the Resplendence flying above the scene, angering it and making it fire a huge laser on Vigrid.

"Artists have often depicted the Cardinal Virtue of Prudence, Sapientia, as a marine animal roaming the depths of the sea. This is likely due to the human disposition to characterize the sea as the source of all life, a veritable fountain of prudence and wisdom. It is also thought that Sapientia is responsible for the rise and fall of the tides, and natural phenomena such as tsunamis. The grand idea that the living seas could be nothing other than the Divine Will at work is actually evidence of Sapientia's narcissism, even amongst the other Cardinal Virtues. When a man born as a slave led his people to freedom from ruling oppression, it is said that it was only Sapientia's favor that parted the seas and allowed for their escape." 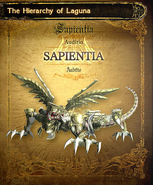 Sapientia's page in the Hierarchy of Laguna book.

Sapientia's card.
Add a photo to this gallery
Retrieved from "https://nintendo.fandom.com/wiki/Sapientia?oldid=527358"
Community content is available under CC-BY-SA unless otherwise noted.