He first appeared in the SNES classic video game F-Zero, and has perpetually been one of Captain Falcon's greatest enemies. He is noted as being a leader of a group of bandits who hide out in the Red Canyon, a location visited in a dramatic race against Goroh in F-Zero GX.

A rumor states that Goroh loathed Captain Falcon seeing that they were both on a member of the Internova Police force. He's a surprisingly athletic character who can perform multiple different manoeuvres that would be challenging for anyone to do.

Another one of his enemies is Antonio Guster, who years ago was a partner of Goroh's, but was left behind by him for the Space Allies to arrest. Ever since then, Guster has sworn revenge on Goroh.

As of yet, Samurai Goroh has appeared in two Super Smash Bros. video games - Super Smash Bros. Melee and Super Smash Bros. Brawl. In Melee, Goroh appeared as a trophy that could be viewed among 291 others, with his F-Zero racer appearing as another. Not only that, he was also shown during the beginning CG video where he was racing against Captain Falcon, ultimately losing. His trademark pink racer also appears among the racing pack in the game's F-Zero themed battle arenas.

He makes a bigger appearance in Super Smash Bros. Brawl and Super Smash Bros. for Nintendo 3DS/Wii U as an Assist Trophy character, where he'll assist the player who summoned him by frantically slashing his sword towards their opponents.

"A rival bounty hunter, Samurai Goroh has crossed paths with Captain Falcon in many a dark corner of the universe. He also goes head-to-head with Falcon in F-Zero races, so the threads of their fates seem to be deeply intertwined. Samurai Goroh is famous for his katana, and his signature T-shirt is instantly recognizable."

"A man who presents himself as a bounty hunter much like Captain Falcon but is also the boss of a notorious bandit group. He tries to collect criminal bounties but always fails to beat Captain Falcon to the collar. He considers himself Falcon's arch-rival and always tries to beat him in F-Zero races. His machine, the Fire Stingray (#05), has a high top speed." 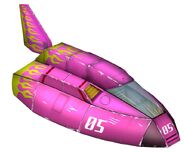 #05: Fire Stingray.
Add a photo to this gallery
Retrieved from "https://nintendo.fandom.com/wiki/Samurai_Goroh?oldid=520511"
Community content is available under CC-BY-SA unless otherwise noted.