Silph Co. is the biggest corporation in the Kanto region dedicated to creating Pokémon-related items. Products created by Silph include Poké Balls, Great Balls, Ultra Balls, the Master Ball, Potions, the Silph Scope, most TMs, Repels, many held items and the Pokémon Porygon along with its evolution. Because of their status and importance in the Pokémon world, Silph Co. was the target of Team Rocket during Pokémon Red and Blue and Pokémon FireRed and LeafGreen.

The headquarters itself is an eleven-floor building, with warp tiles that make it like a maze. The player will be thanked when he helps the company against Team Rocket and will be given a Lapras by an employer. After defeating Giovanni, the president of the company will give the player a Master Ball.

During Pokémon Gold and Silver, however, Silph Co. doesn't let the public visit all the building because of increased security.

A Fighting-type. It is not considered a true gym despite the "GYM" sign in the outside, as it doesn't have the power to grant a challenger a badge, but it's thought it may have been the official gym in the past. After a challenger defeats the leader Kiya, he or she is able to choose from Hitmonchan or Hitmonlee as a prize.

During the Gold and Silver era, an underground Magnet Train connects Goldenrod City and Saffron City. However, it can't be used until a special Pass is acquired. To get the pass you have to go to Copycat's house and talk to her. She will mimic you and say she lost her Poke Doll and she will give the Magnet Pass to you if you get her the Doll. The doll lies in the hands of a trainer in Vermilion City that gives the doll back to you if you talk to him. After you get out of the house were the trainer was in, in Heart Gold and Soul Silver Steven Stone comes and talks to you. However he does not battle you. He just asks have you seen a Latias or a Latios depending which version you have. After that then you can go back to Vermilion City, give it to Copycat and she will give you the Magnet Pass. Before you could do all of this, you have to get the machine part for the Power Plant near Lavender Town.

A club where people gather to talk about famous Pokémon trainers. It wasn't present in Pokémon Red and Blue or Pokémon Gold and Silver, but it appears in Pokémon FireRed and LeafGreen.

Saffron is home to many known characters in the Pokémon games. They include:

Main article: Saffron City (Super Smash Bros.)
Saffron City is present in the original Super Smash Bros. and appears as a stage. It features the roof of Silph Co. along with two other buildings, and Route 5 and the mountain range near Cerulean City can be seen as well as some Flying-type Pokémon like Butterfree or Pidgeot randomly flying across the city. The roof of Silph Co. also features random Pokémon coming out and performing moves who hurt players near them. 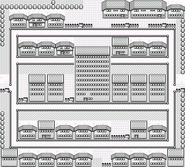 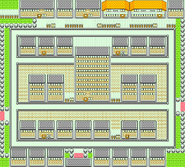 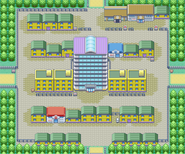 FireRed and LeafGreen.
Retrieved from "https://nintendo.fandom.com/wiki/Saffron_City?oldid=525831"
Community content is available under CC-BY-SA unless otherwise noted.