This section or page has been requested to be rewritten.

Please remove this template once or when it has been rewritten.

Risky Boots is the primary antagonist of the Shantae series. She is the archenemy of Shantae and is known throughout Sequin Land for her love of wealth, power, and all shiny things. Risky is an unchallenged and self-proclaimed 'Queen of the Seven Seas', and will caution and toll anyone who thinks otherwise. She commands an endless army of Tinkerbats who follow her orders without question.

Risky Boots wears a large pirate hat, with a skull symbol, which keeps her long growing hair in (her hair is actually just as long as Shantae's, which is revealed when she disguises herself as a half-genie during the course of Shantae and also later during the final fight at the end of the same game, when Shantae deals her sufficient damage to make her outfit fall apart). She has a purple necklace with a gold pendant around her neck, a top that looks like the upper half of a skull, deep purple pants lined with a white rim that looks like a jaw bone, a belt which holds her scimitar and pistol. It is revealed in The Pirate's Curse that the skull pieces on her outfit are actually the skull of the Pirate Master, Risky's former captain. She particularly has a voluptuous and curvaceous figure, which her outfit accentuates, and large breasts, covered by a skull bra, and wide hips.

In the first game, Risky Boots makes her presence known to Shantae when she and her Tinkerbats invade Scuttle Town. Shantae is able to protect the town, but fails to stop Risky from stealing Mimic's new Steam Engine. With her initial goal achieved, Risky then sets out to find the four Magical Stones so that she can improve the Steam Engine and make it suitable for her goals.

Risky loses the first three stones to Shantae, but later disguises herself as a Guardian Genie and manipulates Shantae into finding the fourth, after which she steals the whole set. Shantae then follows Risky to her hideout on a solitary island, where a giant mechanical fortress protects Risky's ultimate power: the Steam-Powered Tinkertank. Though formidable, the tank is destroyed due to its complete lack of weaponry, and Risky is forced to fight Shantae herself. After being defeated, Risky escapes before the island explodes.

Risky crashes the Relic Hunter's Expo at the beginning of the game and makes off with an old lamp that Mimic had just dug up. Her escape is covered by her new invention, the Steam-Powered Tinkertub, which Shantae disables but fails to stop before it escapes.

As Shantae collects the Magic Seals needed to prevent the lamp from activating, Risky frequently appears to taunt and belittle the half-genie's progress. Once the third Seal is found, Risky has Mimic kidnapped (with help from the zombie siblings of Rottytops, Abner Cadaver, and Poe) and blackmails Shantae to give the Seals to her. With no other option, Shantae surrenders the Seals and is promptly stripped of her genie powers when Risky activates the lamp. Risky then commands the stolen powers to destroy its former master, which it does by manifesting as Nega-Shantae.

Shantae defeats Nega-Shantae, but Risky escapes with the lamp and leaves the heroine with nothing but a hollow victory to show for her sacrifice.

Shantae and the Pirate's Curse

As Shantae struggles to adjust to life without her genie powers, Risky arrives and captures her in a boobietrap bathtub, apparently believing that Shantae and her friends stole her army and weapons. As Shantae denies such actions, Risky takes her to Mimic's lab where she shows her a Tinkerbat trapped in a cage. However, the Tinkerbat is soon being surrounded by a dark fog which turns him into what Risky calls a Cacklebat. After releasing Shantae and watching her defeat the Cacklebat, she gives her the Magic Lamp so that she can imprison the strange black fog. Risky explains that the Cacklebat is proof that her former mentor, The Pirate Master, is preparing to return by spreading a curse through Sequin Land, and that she needs to seal off his sources of dark magic to prevent it. As she has been stripped of her Pirate Gear, Risky needs Shantae's help to do it.

Faced with a mutual goal, the two women agree to a truce and set off for the islands surrounding Sequin Land. As they adventure, Risky explains her past relationship with the Pirate Master: Risky had served on the Pirate Master's crew as the first mate, and took the Master's weapons and crew for herself after his defeat. She also reveals that when Shantae destroyed Nega-Shantae, the light magic that Risky stole from Shantae was consumed by the Pirate Master's evil soul and turned to dark magic in order to unleash his curse. Risky admits that she will stop at nothing to destroy the Pirate Master, which worries Shantae.

After sealing all of the Pirate Master's sources of dark magic, Risky and Shantae travel to Lonely Grave Island with the intent to blow it up. However, the Pirate Master returns to life and captures Risky out of anger for stealing everything from him. Shantae chases them to Sequin Land Palace and tries to fight the Pirate Master, then is ordered to give up the dark magic she had collected from all the Cacklebats in exchange for Risky's life.

If Shantae doesn't kill all the Cacklebats, the fight with the Pirate Master will end prematurely as he escapes, and Risky runs off swearing that she'll destroy him herself even at the cost of her own life. Shantae can do nothing but hope that Risky succeeds... somehow.

In the true ending of the game, the dark magic is instead turned into light magic and reabsorbed by Shantae, giving her the power to weaken the Pirate Master while Risky runs to Scuttle Town and commandeers a long-range cannon from the Ammo Baron, which she uses to fully destroy the evil fiend. Afterwards, Risky and Shantae meet one final time on Lonely Grave Island, where Risky tells Shantae that she's not going to give up her pirate ways anytime soon, but somewhat compliments the half-genie's heroism by comparing her to her mother.

Risky attacks Scuttle Town and steals Uncle Mimic's Dynamo blueprints, then allows Shantae to 'defeat' her and returns her own set of blueprints in their stead. Her ultimate goal is to complete the Tinkerbrain so that she can rule the Genie Realm from yet another volcano hideout. When Shantae thwarts her plan, Risky once again escapes before her volcano base erupts.

Risky Boots stars as a playable character for the first time in the DLC pack Pirate Queen's Quest. Supposedly the episode is set during the several hours during which Shantae was unconscious and corrupted by the magic inverter. Each of the levels follow Risky extorting construction materials for the Tinkerbrain from the Barons of Sequin Land. In the end it is heavily implied that the events of the episode are hugely exaggerated (or even completely made up) by Risky in order to make herself look good.

Risky Boots has appeared in Super Smash Bros. Ultimate as a spirit.

Though she prefers to leave combat to her machines and Tinkerbats, Risky Boots has proven to be a powerful fighter (as proven at the end of the first game). In combat, Risky's main weapon is a large pirate's scimitar that she can rapidly slash with or throw like a boomerang, and she also carries a flintlock pistol that fires bullets. Risky can also dash around in mid-air for dive-bombing attacks and perform a brutal slide-kick when on the ground. She is also able to perform various acrobatic feats akin to parkour, which seems to suggest superhuman levels of athleticism. She also appears to have a high level of endurance for a human, as she is able to take many hits from Shantae's magic, and still have enough energy to escape almost unscratched from her final fight with Shantae in the first game. Risky is also highly intelligent and surprisingly effective with technology, being able to conceive grandiose machines for her Tinkerbats to build and to operate them quite effectively.

Despite her deadly proficiency in the first game, Risky claims to be completely defenseless without her sword and pistol; in Pirate's Curse she was unable to combat a single Cacklebat, even with her kicking moves. Whether she truly felt defenseless or whether she simply feared of becoming possessed herself is unclear. 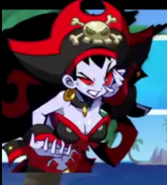 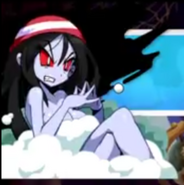 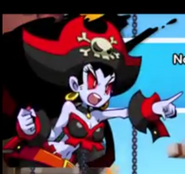 Add a photo to this gallery
Retrieved from "https://nintendo.fandom.com/wiki/Risky_Boots?oldid=557771"
Community content is available under CC-BY-SA unless otherwise noted.