This game is part of Nintendo Switch's Arcade Archives series

Renegade (Nekketsu Kōha Kunio-kun in Japan) is a beat 'em up for the NES and the first entry in the Kunio-kun series which includes Super Dodge Ball and River City Ransom. It was also the technological predecessor to Double Dragon.

Considered to be one of the most influential fighting games in video game history, the game has spawned a variety of ports on the modern Nintendo consoles, with the NES version ported out on the Virtual Console service for Wii, Wii U and 3DS systems. A port of the Arcade version was rolled out to the Switch as part of the Arcade Archives programme in 2018, followed by yet another emulation of the NES version to the system two years later.

As the predecessor to most beat 'em ups, it was rather simplistic but still has the 4-directional control and the punch-jump-kick action. the first three stages each consist of a series of two-screens wide levels against a group of three enemies at a time, culminating in a one-on-one fight with the boss.

There are two types of enemies, one's with less hit points and others with more hitpoints and weapons but hit for weaker normally. The second stage has a motorcycle chase scene where the player tries to kick off opponents off their motorcycles prior to the boss fight. The third stage has two paths; one with the stage boss and one with another level of small fry enemies. 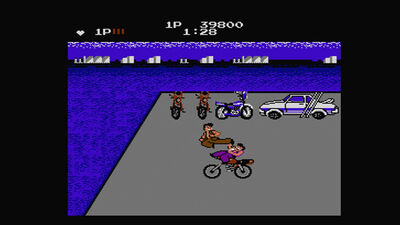 A motorcycle fight in the second stage.

The fourth and final stage is a maze of numerous rooms, filled with enemies and previous bosses, inside a building which the player must proceed in order to reach the final boss. This stage introduces knife wielding enemies that kill in one hit and the final boss wields a gun which is also one-hit-kill. There are also trap doors which warps the player to last stage and force the player to restart progress.

Beating the boss results in a scene where he is greeted by his rescued girlfriend with a kiss and the cycle begins again, albeit harder.

The plot of the Western release is that the player controls a vigilante (named Mr. K in the NES version), who fights a variety of street gangs on his way to save his girlfriend.

The original Japanese plot was Kunio-kun standing up for his bullied friend, Hiroshi. Each stage begins with the stage's gang beating up Hiroshi in front of Nekketsu High School and Kunio chasing after his attackers. The Japanese arcade version actually had the Boss's names as an identifier. Named in order of encounter, there is Riki (りき), Shinji (しんじ), Misuzu (みすず) and Sabu (さぶ). The game ends with the students swarming Kunio-kun and Hiroshi giving Kunio a firm handshake.

Retrieved from "https://nintendo.fandom.com/wiki/Renegade?oldid=598135"
Community content is available under CC-BY-SA unless otherwise noted.