Adventure/RPG
Raven Blade was a cancelled GameCube game that was being developed by Retro Studios. It was one of four games Retro had planned, and two of their games were canned to give the company more time for Raven Blade and their other title Metroid Prime. Eventually Nintendo decided to cut Raven Blade as well to allow Retro to have exclusive devotion to Metroid Prime. The game involved a sword of legend named Raven Blade that was given to a man who would destroy all evil in the world.

The game would have the player take the role of an unnamed protagonist who would wield the Raven Blade in his adventure to rid the world of evil. The antagonist was named Beastlord. Other than this, not much is known on the plot of the game.

The game was originally just known as Retro Studios RPG, though later the people at Retro renamed it to Rune Blade. Prior to E3 2002, Retro changed the name yet again to Raven Blade. The game was conceived by Steve Barcia, with David Cook as the senior designer. The game was started in 1999 after Retro Studios opened up shop. IGN reported that Retro Studios was tirelessly working out the problems of the game's battle system, which would be pivotal to the overall experience. The source of the information was anonymous. The problems would be non stop, and this was due to Nintendo's higher interest in Metroid Prime. Many of the people that were working on Raven Blade were merged over to Metroid, making the progress of the game even slower than before. Nintendo didn't like how the game was taking so long to create, and reportedly said that if the game hadn't gone through a major improvement by July 24 of 2001, then they would cancel the project altogether. Five days before the twenty fourth Retro and Nintendo told the gaming world that they had cancelled the game. Raven Blade was the third of four games that the two had cancelled, though it gave the company the opportunity to work exclusively on Metroid Prime, which was the game that fans and Nintendo in Japan were most interested in. Some of the prominent figures that were working on the game moved over to Sony Online Entertainment to work on Star Wars Galaxies.

Early on in development the game was set to be a traditional RPG with turn based combat, though they later opted for the real-time action that the game featured before it was canceled. The game was fast paced and from the videos available it resembled slightly God of War for the PlayStation 2. Raven Blade was influenced by the novel Elric of Melnibone by British writer Michael Moorcock. 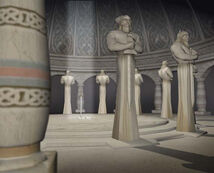 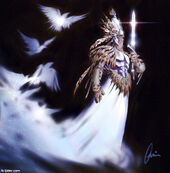 Add a photo to this gallery
Retrieved from "https://nintendo.fandom.com/wiki/Raven_Blade?oldid=606521"
Community content is available under CC-BY-SA unless otherwise noted.