Power Plant is an optional dungeon in the Pokémon series. It is an abandoned electrical plant, located on the coast of Route 10, just south of the entrance to Rock Tunnel. The player will need to have Surf before they are able to reach the dungeon's entrance. Despite being abandoned by humans for many years, the Power Plant's residual electricity and machinery still attracts many Electric type Pokémon including the Legendary Bird Zapdos. Many of the item balls scattered on the ground are actually Voltorb and Electrode in disguise.

The Power Plant is located in the Kanto region and has appeared in the first, second, third, and fourth generation games. 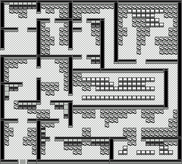 Retrieved from "https://nintendo.fandom.com/wiki/Power_Plant?oldid=553673"
Community content is available under CC-BY-SA unless otherwise noted.