The Pokéwalker is a device that comes included with every copy of Pokémon HeartGold and SoulSilver for the Nintendo DS, also now available from the Nintendo Online Store. It is a pedometer designed to look like a shrinked Poké Ball.

In the game, the player can merge a Pokémon over to the pedometer wirelessly. Afterwards, each step the Pokémon will gain one experience point. After returning, the player can transmit the data back to the game. Transfers are all via infrared which is built into the cartridge and the Pokéwalker. First the player must transfer Pokémon he/she is willing to walk with to the PC in the game. Then you restart and pick the Pokéwalker from the start menu. It can be tricky to sync, but after going through the menu a few times, then the player will be able to do it. When the EXIT button comes up, the player must aim the Pokéwalker at the game cartridge about 2 inches apart and sync via holding the larger middle button for some time to get it to work. It will beep and make noises for feedback. When wearing it, it does sleep after 90 seconds sitting and the player have to press the bigger middle button for a second to wake it up. According to the operations manual, it does record steps when asleep, it's like any other screen blanker and is still recording steps while blanked. It is only made to store about one day of walking (10,000 steps). So, it should be synchronized every day. The player do get Pokémon and items while using it and can store three Pokémon and three items that show on the display. After ten items, it receives Watts instead of items. It says to use it for a half hour a day, with that guideline it should last about four months on a battery (CR2032 watch type). It starts with two courses: Refreshing Field and Noisy Forest. As the player walks, other routes become available: Rugged Road (50W), Beautiful Beach (200W), Suburban Area (500W), Dim Cave (1000W), Blue Lake (2000W), Town Outskirts (3000W), Hoenn Field (5000W), and so on for twenty seven total built in. There are other things that trigger new courses, like special events and Pokémon.

Each number on the counter is steps and every 20-40 steps is known as a Watt (about 30 steps average). For every 3-31 watts you can play the item finder (next to left most icon) and 10-31 watts to find and battle Pokémon (left most icon). The numbers are variable, if you only have 3 watts left you can only play the item finder, if you have more than 10 watts you can play either. As you add strolls they become harder and take more steps per watt. It's also harder to capture Pokémon in the higher strolls. One thing you shouldn't do is update the DS while a Pokémon is out for a stroll, you will likely loose the session and all items and captured Pokémon, but not the Pokémon you took for a stroll. It crashes and the Game (HeartGold or SoulSilver) resets to the last backup before the stroll.

The leftmost icon is the Poké Radar, which lets you find, battle, and possibly capture Pokémon every 10-31 watts. It shows four groups of tall grass and notes one with ! and you have to select it with the left and right buttons (to move to it) and Larger center button to select it. Select it several times (as it blanks and moves) and a Pokémon to battle/capture will appear. Then the buttons become (left to right) Attack, Poké Ball, Evade. You can capture up to two Pokémon on your stroll.

Item finder lets you find items every 3-31 watts. After picking a place (with the bigger center button) will tell you if the item is near or far: near means it's next to the place you picked (left small button or right small button), far means at least one away (two or more places).

Connects you to the game in the DS or another Pokéwalker. You have to hold the bigger button while the transfer is in process or it will fail.

Shows your Name, the Current Stroll Route, and the Time. Hitting the smaller button on the right in the Trainer Card gives you more details about the Stroll(s) so far and totals.

Shows your current Pokémon (3 Max.) in the Pokéwalker and the Items (10 Max.) there. You may catch up to three Pokémon then afterwards it'll ask you to replace one. Although reading the manual says 10 items maximum, only three seems to be able to be carried at a time (it asks if you want to swap items after that).

Lets you control volume and contrast of the display.

Normal walking mode showing your steps, the current Pokémon and an Icon for the Route. Many Route Icons repeat, for example Noisy Forest Icon is the same as Treehouse, and Big Forest.

The Pokéwalker is twined with the game running it and the game really controls it. So when things go wrong, it's the game you have to use to reset it. Try never to do this with a Pokémon in the Pokéwalker. Always try to return the Pokémon before you do anything, resets, updates (to the DS) or restarts to the game. Of course a restart (NEW GAME at the first prompt) resets the game so it doesn't really matter at that point it's like twinning it to a new game anyway. There is a low battery indicator on the display in the uppermost left, looks something like a card with connector on top or a squarish battery which appears when it's below 3v. It will try to hold information during a battery change and will set the time correctly again when next linked (first thing it looses is the time).

If you go to CONNECT TO POKEWALKER, go to the bottom thing on that screen (Save, then go for a stroll or Exit), hold down the x, the L, and then hit the down and it will show 'Caution!'. Hit the A and follow the prompts to reset the Pokéwalker, or you just shut off at this point and abort the reset. Resetting is also the way you can twin the Pokéwalker to a new game cartridge (switch between HeartGold and SoulSilver with one Pokéwalker). 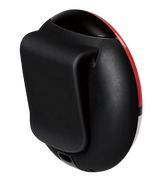